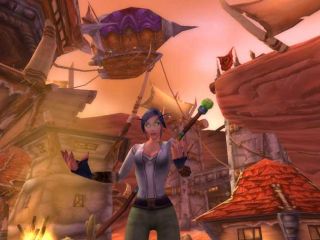 Playable female characters remain a minority in video games, although the growing trend of customizable characters could change that.
(Image: © Blizzard Entertainment)

The biggest census of video game characters ever conducted has found those groups mostly missing in action.

The lack of diverse playable characters in video games could make a serious impression among gamers and the broader U.S. population. A 2008 study by the Pew Internet Project found that almost all U.S. kids and teens play video games, along with a majority of young adults and almost half of all adults.

Female and Latino gamers in particular would have a hard time finding their virtual counterparts, despite each representing major players of video games. That suggests video game developers could have overlooked a hugely underserved group of customers, especially if they wrongly assume that the average video gamer remains a white male.

In terms of what game makers produce, "I'm the target audience, a white guy in my 30s," said Dmitri Williams, a communications researcher at the University of Southern California who headed the virtual census. "But the country doesn't look like me anymore."

Williams and his colleagues set out to survey the top 150 bestselling games on nine major video game platforms, including the Xbox 360 and Playstation 2. The 2005-2006 data does not include the later launches of platforms such as the Nintendo Wii and Playstation 3, and does not count first-person shooters and games where playable characters are never seen or cannot be identified as human. The findings were released last week.

The researchers wanted to improve on previous studies by looking at representation among video game characters in terms of games sold, rather than just games made. That means characters in a top-selling game such as "Madden NFL" counted more in the study than characters from less popular games.

However, only video games showed a far greater imbalance for females, who made up just 15 percent of video game characters.

"There are a lot more women in the television industry; besides the female audience is widely recognized in its importance for TV," Williams told LiveScience. "The game industry has not focused on women, even though women are 38 percent of all players."

The lack of female characters did not come as a huge shock, given the video game industry's past. What did surprise Williams was the glaring lack of Latino characters at just 2 percent, even though Latinos make up 12.5 percent of gamers.

"Studies of Latino children show they play more per day than white children," Williams said. "They're a minority, but very large minority."

Only African Americans proved the exception to this, given their relatively high representation among video game characters compared to video game developers. But their numbers dropped steeply outside of virtual athletes in sports games, with many remaining characters representing gangsters and street people in games such as "Grand Theft Auto" and "50 Cent Bulletproof."

The imbalanced depiction of minorities in video games should prove far more troubling than the hyped racism controversy last year over "Resident Evil 5." That game may have even taken a fairly nuanced approach to issues of race and politics, according to one expert interviewed by LiveScience.

There's hope yet for video games. Williams noted that the census data has already fallen behind by several years, and also pointed to the growing number of video games that emphasize character customization. Such options are especially common among massively multiplayer online games, of which the census only included the popular "World of Warcraft."

"The more player control there is, the more likely people will make characters that look like them — or that they want to look like," Williams said.

What players want in their characters remains an unanswered question. Even minority kids may prefer creating idealized characters which resemble the mainstream of American society. Besides, the stunning lack of both children and elderly people in video games also hints at a preference for characters in the prime of their lives.

Either way, this all suggests a vast array of untouched video game stories featuring females and minorities. And the video game market has yet to tap this business opportunity.

"You could leave out the morality entirely and say 'I don't care about who is being underserved,'" Williams said. "Just think about it as a business proposition and a missed opportunity."