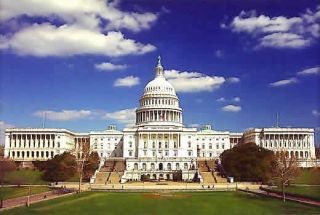 The United States Capitol in Washington, D.C., is among the most architecturally impressive and symbolically important buildings in the world. It has housed the meeting chambers of the Senate and the House of Representatives for almost two centuries. Begun in 1793, the Capitol has been built, burnt, rebuilt, extended, and restored; today, it stands as a monument not only to its builders but also to the American people and their government.
(Image: © Architect of the Capitol)

Politicians' personal lives used to be fairly private, but nowadays, nothing is, and the public is left trying to make sense of all the marital infidelity revealed in recent years, the latest being the case of South Carolina Gov. Mark Sanford.

The acts of impropriety, admitted or only suspected, run counter to many politicians' hard-line career commitments to fighting the decay of family values or other moral or social values.

The obvious question on many minds: What were these dudes thinking? The short answer, researchers say: Power and corruption go together.

While no outsider can read a man's mind, psychologists have suggested several reasons for politicians' seeming hypocrisy, including a feeling of invincibility and "no one can touch me" attitude. Plus, people in high positions have more opportunities to step out of line. However, humans inherently hold leaders to higher standards and elect those individuals whom they think can resist great temptations, experts say.

Power has been and will forever be entangled with corruption for various reasons, said Daniel Kruger, a social and evolutionary psychologist at the University of Michigan's School of Public Health.

Perhaps that's why power figures and sexual improprieties sometimes seem linked in the public mind. For instance, former Idaho Sen. Larry Craig was arrested in 2007 for lewd conduct in an airport men’s room. Also that year, Sen. David Vitter was linked with prostitutes when his telephone number showed up on phone records of "D.C. Madam," an alleged prostitution service. This list goes on to include Rep. Barney Frank, who in 1989 admitted a relationship with a male prostitute, according to news reports. "[People] hold leaders to higher moral standards than they would their fellow women and men," Kruger told LiveScience. "They want leaders who are ideally beyond reproach, someone who is a good and moral person and will do the right thing even when bestowed with this tremendous power."

Someone like Sanford would likely be blown away that he or she was caught in an allegedly criminal or immoral act, because with so much professional success, failure is the last thing on his or her mind, another expert says.

"I think what's more at play here is just the notion of invincibility," said Scott Reynolds, assistant professor of business ethics at the University of Washington in Seattle, "that sometimes when things go well for us and just again and again and again, we're successful, we start to believe that nothing can go wrong."

Even still, the false sense of invincibility can induce risk-taking behaviors that have colossal consequences. "We're willing to take more risks; we're willing to do more behaviors that are risky and we end up doing some things that aren’t very smart," Reynolds said of the idea that success can breed poor decisions.

"People take risks often times because they're valuing the immediate rewards rather than something down the line," he said, adding that after a while, one's immoral behavior can become routine and we stop thinking about it consciously.

Leader or not, do-gooders may be more smoke-and-mirrors than the real McCoy.

Research has shown people do the bare minimum in many respects, and so with morality, the appearance of taking the right action could be just as beneficial as actually taking that action.

"We've found far more evidence for moral hypocrisy than we have for moral integrity, at least among the samples of university students that we've looked at," said C. Daniel Batson, professor of social psychology at the University of Kansas, who studies the nature of moral motivation and moral hypocrisy. He noted he thinks his results apply to adults as well, including politicians and businessmen.

And since public opinion can make or break an elected politician, making moral charades can feel like a must, Batson noted in a telephone interview.

"Politicians are asking for the public trust and generally one would trust someone only if they thought they had, if not one’s own best interest, at least the interest of the community at heart," Batson said.