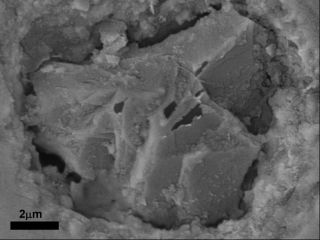 This electron image of an ancient diamond sealed in zircon.
(Image: © Thorsten Geisler and Alexander A. Nemchin.)

Diamonds are indeed forever, or at least nearly as old as the Earth, a new study shows.

Scientists have unearthed diamonds more than 4 billion years old and trapped inside crystals of zircon in the Jack Hills region in Western Australia. Nearly as old as Earth itself and considered the oldest terrestrial diamonds ever discovered, the gems could give insights into the early evolution of our planet's crust.

"Jack Hills is the only place on Earth that can give us this kind of information about the formation of the Earth," said study team member Alexander Nemchin, a geochemist at Curtin University of Technology, Western Australia. "We're dealing with the oldest material on the planet."

About 4.5 billion years ago, Earth developed from a cloud of dust around a proto-Sun. During its youth, Earth smashed into a planet-size body and its surface temperatures likely soared above 10,830 degrees Fahrenheit (6,000 degrees Celsius). When the molten Earth cooled, the liquid lava gelled into rocks. Details about the rocks and when they began to form, a subject of intense debate, have been limited by sparse data.

Zircon crystals could hold the answer. These crystals are tough and relatively resistant to melting. As a result, they retain their chemical nature and can provide vital clues about past events that occurred in the Earth's crust and mantle.

Recent studies of zircons have suggested the Earth might have cooled much more rapidly than previously thought, with the continental crust and oceans forming as early as 4.4 billion years ago.

The diamond find supports this quick-cooling idea, said study team member Thorsten Geisler of the Institute of Mineralogy at the University of Münster in Germany.

The scientists, led by Martina Menneken of the Institute of Mineralogy, ran chemical analyses of the zircons, finding the ancient crystals (and thus the enclosed diamonds) were more than 4 billion years old. That's nearly a billion years older than the previous oldest-known terrestrial diamonds and suggests the diamonds were present in material that crystallized within 300 million years of the formation of Earth, the scientists say.

After considering different diamond-formation scenarios, the scientists concluded the jewels most closely resembled those found in ultra-high pressure conditions. They interpret the findings to indicate that Earth had a relatively thick continental crust by 4.25 billion years ago.

"I'm quite convinced the Earth must be cooler than previously thought because otherwise we couldn't have found diamonds," Geisler told LiveScience. That's because to form diamonds, heavyweight pressures are required.

"To reach a pressure in the mantle, we need a relatively thick continental crust," Geisler explained. "That means we already had rocks [on Earth]."

The study will be published in the Aug. 23 issue of the journal Nature.