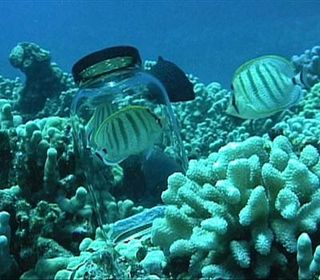 Male butterflyfish inspects and postures at a bottled fish pair that was introduced into its feeding territory. Wild fish produce sounds to intruders, and also their mates. Image
(Image: © Timothy Tricas.)

Increasingly scientists are discovering unusual mechanisms by which fish make and hear secret whispers, grunts and thumps to attract mates and ward off the enemy.

In just one bizarre instance, seahorses create clicks by tossing their heads. They snap the rear edge of their skulls against their star-shaped bony crests.

This and other discoveries made in recent years come as the focus on the sounds that fish make is growing beyond "really loud sounds that last a long time," fish behaviorist Timothy Tricas at the University of Hawaii at Manoa told LiveScience. "Seahorse clicks are brief, only about five to 20 milliseconds," he said.

There are more than 25,000 species of fish living today, more kinds than any other animal form with a backbone in the history of the planet. A lot of them appeared to have done well in school.

"We know so far that at least 1,000 fish species make sounds, with a huge diversity of means by which they generate and listen to sounds," Tricas said. "There's only a handful we know well so far."

Tricas and his colleagues studied butterflyfishes, a family that includes 126 species with bright colors and striking patterns found on just about every coral reef in the world. One group within the butterflyfish family, comprising more than 80 species, are the only fish known so far to couple their swim bladders, which are organs that improve hearing, with their body's lateral lines, organs running down their sides that help detect motion in the surrounding water. This might be akin to a person hearing sounds by wiring their ears together with the little hairs on his or her skin.

This setup in butterflyfish seemed like a possible new hearing system, "but no one had ever heard butterflyfish make a sound. We discovered they do," Tricas said.

"If you're up close to them with a hydrophone, you can hear the sounds, but the total power in a single sound is miniscule compared to the loud and long sounds the toadfish and [fish known as] midshipman can make, which can last for seconds or minutes and can be heard 10 to 20 feet away," Tricas said.

Tricas presented research on these and other fish sounds at a meeting of the Acoustical Society of America in Hawaii last month.

The butterflyfish might have coupled their swim bladders with their lateral line because "they don't have a mechanism to make loud sounds," Tricas speculated. "They can only generate these weak signals."

"We also know butterflyfish swim very close together," Tricas said. "What we think might be happening is they are essentially whispering, and have to swim close together to listen."

A fish that other scientists have recently investigated is the pearlfish. Curiously, these dwell inside living sea stars or tubular creatures known as sea cucumbers.

While a number of fish, such as the toadfish, communicate with their swim bladders by rapidly twitching it back and forth with muscles, the pearlfish instead use a much slower muscle that generates strong, low frequency sounds which pearlfish may use to speak with others, advertising their presence even from inside their homes.

"Think of the pearlfish swim bladder as a bongo drum. If you could grab its skin and let it go like a rubber band to go thunk, that's what the pearlfish is doing, some four to 20 times per second," Tricas said. "It's a highly novel system that I've never heard of anything like before."

Studying fish sounds could help shed light on the evolution of communication and hearing, as well as related behaviors, such as finding of mates or defending of territory, Tricas said. For instance, the fact that butterflyfish can effectively only whisper "may help explain the evolution of their pairing behavior, why the fish appear so social, and why almost all butterflyfish affiliate with one another so often."

Currently the purposes of some fish sounds remain complete mysteries. "There were early claims that seahorse clicking increased in intensity during courtship, but no evidence has been found to support that. It's a tantalizing question for scientists to work on," said marine conservationist Amanda Vincent, director of Project Seahorse in Vancouver.