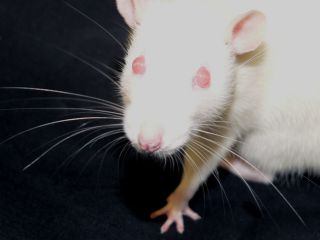 Rats have approximately 30 whiskers on each side of the face.
(Image: © AS Kaloti and MJ Hartmann/Northwestern University)

When rats snuggle up for a nap, they replay "movies" of their daily activities in what scientists suggest is the animal equivalent of dreaming, a new study suggests.

The research supports the idea that memories are cemented into the brain during sleep.

"This work brings us closer to an understanding of the nature of animal dreams and gives us important clues as to the role of sleep in processing memories of our past experiences," said co-researcher Matthew Wilson at the Massachusetts Institute of Technology (MIT).

In a past study, Wilson measured activity in rats' hippocampuses, the brain's memory center, while awake and sleeping. They found that rats do form memories of events they experienced while awake, and that the rodents replayed the memories while snoozing. But whether the rats replayed actual images was unknown.

In human dreams, vivid images typically weave together to form a memory movie. To find out if rats replay visuals, Wilson and Daoyun Ji, also of MIT, measured brain activity in the hippocampus and visual cortex while rats ran through mazes with different designs on the floors and walls. The brain regions showed specific patterns as the animals sensed their surroundings in the maze.

Then, while the rodents slept the scientists re-measured the brain activity. Turns out rats reeled through a string of images showing the maze-running experiences. The exact patterns of neuron-firing while awake also showed up during sleep in the visual and memory regions.

Also, the scientists recorded activity of individual neurons in the rats' brains while the animals were awake and asleep. They found that the same neurons spiked during wakeful play got reactivated during sleep.

From this the scientists infer that during sleep, neurons in the visual region "talk" to those in the hippocampus in a sort of "conversation," suggesting that rat naps help consolidate daily experiences and make these memories stick.

For the first time, this work shows that the brain is replaying memory events in two locations at once--in the visual and memory centers.