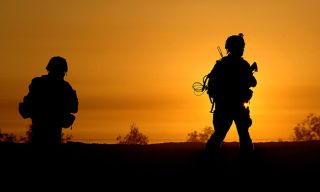 The U.S. Senate voted 65 to 31 today (Dec. 18) to repeal the Don't Ask, Don't Tell act, sending President Obama legislation to overturn the policy and allow gays to serve openly in the military.

"By ending 'Don’t Ask, Don’t Tell,' no longer will our nation be denied the service of thousands of patriotic Americans forced to leave the military, despite years of exemplary performance, because they happen to be gay," President Obama said in a statement today. "And no longer will many thousands more be asked to live a lie in order to serve the country they love."

"Don't ask, don't tell" was enacted in 1993 to allow gay citizens to serve in the military as long as they kept their sexuality a secret. In return, military officials are not to ask service members to reveal their sexual orientations. Even so, at least 13,425 military personnel have been discharged under the policy, according to Servicemembers United, a national organization of gay troops and veterans.

The vote comes on the heels of a Pentagon report, released on Nov. 30, which found that lifting the ban on gays serving openly in the military would come with only minimal risks.

That report included surveys of reserve and active troops, finding that 70 percent of respondents believed that repealing "don't ask, don't tell" would have a positive, mixed or nonexistent effect on the military. The report's authors concluded that if the ban were repealed, objections to openly gay troops would quickly fade.

The repeal is also a psychological win for gays in the military, according to the American Psychological Association (APA).

"This long-awaited action is an important step toward allowing gays, lesbians, and bisexuals to serve openly and honorably in the armed forces," said APA President Carol D. Goodheart in a statement. "Repeal of the 'don't ask, don’t tell' policy will lift a heavy psychological burden of secrecy from gay, lesbian and bisexual military personnel."