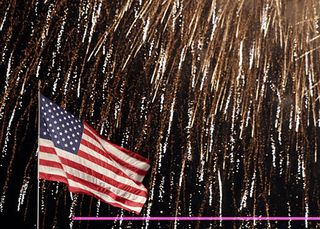 A long-awaited Pentagon report released today (Nov. 30) finds that lifting the ban on gays serving openly in the military would come with only minimal risks.

The report, which includes surveys of reserve and active troops, finds that the majority — 70 percent — of respondents believed that repealing "don't ask, don't tell" would have a positive, mixed or nonexistent effect on the military. The report's authors conclude that if the ban were repealed, objections to openly gay troops would quickly fade.

“It’s my belief, having now looked this matter extensively over nine months, that the leaders of our services — all services, all components — are so good today, so experienced today, that they can effectively implement this change, maintain unit cohesion, and a strong focus on mission accomplishment,” Army Gen. Carter F. Ham, commanding general of U.S. Army Europe and co-chair of the working group that issued the report, said in a Pentagon statement.

"Don't ask, don't tell" is a compromise enacted in 1993 to allow gay citizens to serve in the military as long as they kept their sexuality a secret. In return, military officials are not to ask service members to reveal their sexual orientations. Nonetheless, at least 13,425 military personnel have been discharged under the policy, according to Servicemembers United, a national organization of gay troops and veterans.

President Obama has promised to repeal "don't ask, don't tell," but Republican gains in the 2010 midterm elections mean that the policy's future may lie with the lame-duck Congress. A national survey released yesterday (Nov. 29) by the Pew Research Center finds that 58 percent of Americans favor allowing gay men and women to serve openly. The same survey found that 27 percent opposed open service for gays and lesbians.

Military and public in agreement

The military numbers essentially mirror those in the general population, said Tammy Schultz, the director of national security and joint warfare at the U.S. Marine Corps War College. Schultz, who was not involved in the Pentagon study, said that the strong numbers are somewhat surprising given the perception of the military as more conservative than the general population.

"We're seeing that the military by and large is in concert with the American people on this, that it's time to repeal 'don't ask, don't tell,'" Schultz told LiveScience.

In addition to a survey of 400,000 service members, the Pentagon received over 72,000 online opinions from service members and their families and conducted focus groups and face-to-face interviews with over 24,000 troops.

Of those surveyed, 69 percent reported that they had already worked in a unit with someone they believed to be homosexual. Of those who said they had served with a gay or lesbian co-worker, 92 percent said the unit's ability to work together was "very good," "good" or "neither good nor poor."

Spouses were equally relaxed about the effect of lifting the ban. Almost three-quarters, or 74 percent, said the repeal would have no effect. Only 12 percent said they would want their spouse to leave the military earlier.

However, Schultz said, "the actual experiences of the combat arms units when asked to reflect about working with a gay person are very good, very positive. So essentially, attitudes don't equal behavior."

The reports' authors listed several recommendations for how to go about lifting the ban, assuming Congress approves, emphasizing leadership and equal opportunity for straight and gay soldiers alike. The Senate Armed Services Committee is scheduled to hold hearings on "don't ask, don't tell" on Thursday and Friday (Dec. 2 and 3).

Both opponents and proponents of lifting the ban will probably try to use parts of the report to their advantage, Schultz said. However, she said, the findings mesh with the studies she's done on integration of gays into other organizations, as well as de-segregation and the integration of women into the Armed Forces.

"At the end of the day," Schultz said, "I think this report provides a lot of empirical evidence that 'don't ask, don't tell' can be repealed without affecting military readiness or unit cohesion."