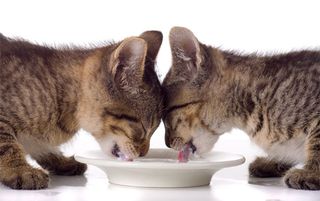 Kittens lap up milk with a little physics in mind, and their lapping rate is about 4 per second (for domestic cats).
(Image: © Dreamstime)

Cats are better physicists than dogs, according to a new study — at least when it comes to drinking.

A cat lapping milk strikes a delicate balance between gravity and inertia, the research finds. Unlike dogs, which use their tongues to scoop water into their mouths, a cat uses the tip of its tongue to pull water upward, closing its jaws before gravity pulls the column of liquid back toward earth.

The method requires cats to lap at just the right speed to balance the inertial force that keeps the water moving upward with the gravitational force pulling the water back down.

"Perhaps the most intriguing part of what we found was that the cats seemed to know just exactly how rapidly or how fast they should lap," study researcher Roman Stocker, a professor of civil and environmental engineering at the Massachusetts Institute of Technology, told LiveScience. "By lapping at the right time, [cats] take optimal advantage of this balance between inertia and gravity."

Stocker and his colleagues report their results online today (Nov. 11) in the journal Science.

The study started one morning with Stocker's cat, Cutta Cutta, a rescue from a Boston animal shelter. Stocker was eating breakfast and watching the cat drink when he suddenly wondered, "How does he do that?"

"It occurred to me that there were some interesting biophysics behind that process," Stocker said.

So he borrowed a high-speed video camera from his lab and taped Cutta Cutta drinking. With several other curious researchers along for the ride, Stocker analyzed those videos, along with video collected from Zoo New England and YouTube.com videos of lions, tigers and other big cats drinking.

"It seems to be that this is the first study in Science that uses YouTube as part of the research," Stocker said.

The first thing the researchers noticed is that cats and dogs drink very differently. Both animals extend their tongues and curl them back toward their chins as they approach water. But dogs use their bent tongues as a ladle, spooning water into their mouths. The scoop of sorts created by the cats' tongues stayed empty. Instead, cats touched only the top surface of their tongue to the water.

Once a cats' tongue touches the surface, it draws it back at a rate of almost four laps per second. The inertia of the movement draws the water upward (think "objects in motion tend to stay in motion"). At the same time, gravity fights to pull the water back down. As these forces lengthen and stretch the water column, the cat snaps its jaws shut at just the right moment, catching a mouthful of liquid before it falls.

Since you can't tell a cat to do anything, much less vary its rate of drinking, the researchers built a robotic tongue to verify the forces at work. The "tongue" was a simple glass disk that could move at different rates so researchers could calculate the volume of water ingested with each lap. (Domestic cats get about 0.1 milliliter of liquid per lap, they found. At 4 laps per second, that's nearly 5 teaspoons (24 ml) a minute.) [See slow-motion video of a cat drinking]

The model also allowed the researchers to predict that larger cats would need to lap slower to strike a balance between the inertia and gravity of the water picked up by their tongues. Sure enough, the videos showed that lions and tigers lap less than 2 times per second, about half the rate of domestic cats.

As the research was done in a "rather unconventional fashion without any funding," Stocker said, "applications were not the first thing on our minds."

But the work could be important in the field of soft robotics, he said, which often models itself upon boneless but dexterous structures like elephant trunks, octopus arms — or cat tongues.

With the mystery of cat drinking resolved, Stocker has returned to his regular work of researching the fluid mechanics of marine microorganisms like plankton and bacteria. That should let Cutta Cutta get back to a regular cat schedule of lounging in sunny spots and batting at dust motes.

"He has become the star of all our videos and pictures so far," Stocker said of Cutta Cutta. "He might be a bit fed up with photography, but he has been extremely collaborative."