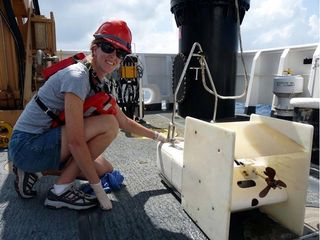 The longest sampling trawl of tiny ocean creatures called plankton is under way across the Pacific, where little is known about these critters that make up the base of the ocean's food web.

Scientists onboard the NOAA ship Okeanos Explorer will have covered a total of more than 5,100 miles (8,207 kilometers) across a portion of the Pacific Ocean by the time the two-part project is complete. The study comes as plankton across the globe have been disappearing over the past century at a rate of about 1 percent per year, according to a recent study.

Plankton consists of drifting microscopic plants (phytoplankton), animals (zooplankton), bacteria (bacterioplankton) and viruses (virioplankton) that inhabit oceans, seas and bodies of fresh water. They are the most abundant form of life in the ocean. In fact, all other marine life is dependent upon plankton for food.

Phytoplankton are the world's top source of oxygen and are responsible for 90 percent of all the photosynthesis — the conversion of energy from sunlight into organic compounds — that takes place on Earth.

"This project will provide valuable information on plankton for an area of the world that has been largely unsampled," said Lora Clarke, a National Oceanic and Atmospheric Administration (NOAA) Fisheries Service scientist onboard the Okeanos Explorer who oversaw the first leg of the plankton tow. "We will obtain the necessary baseline data to allow an examination of the relative richness and variety of plankton and how this might influence fish, turtle and mammal species. Understanding patterns of plankton biodiversity will help scientists to understand factors influencing global productivity."

Miles to go — and tow

Sailing from Guam en route to Hawaii in late August, the research team conducted the first leg of the plankton sampling by towing a device that filters plankton from the water onto rolling silk screens that can later be analyzed in the lab. The ship trawled for 14 days across more than 3,100 miles (4,988 km). After a layover in Hawaii, the ship departed Oct. 19 for San Francisco, with NOAA's Stephanie Oakes leading the next phase of the sampling mission.

The ship will cross the breadth of the area and take one of the first measurements of its width by carefully analyzing plastic particles caught in the ship's nets.

Scientists will be testing the plastic particles for surface contaminants in an attempt to expand our understanding of the multiple impacts the debris can have on marine ecosystems.

Plastic debris has many observable effects on marine life. Thousands of marine animals die each year from interactions with plastic litter, including plastic fishing line and gear. What is less known is how plastics affect the smallest organisms on which other marine life feed.

"The information on the biodiversity of plankton across the Pacific will be exciting to see," said Michael Ford of NOAA, who is leading the project. "The size spectrum of plastic particles and the size of the Garbage Patch is just as exciting. By putting the two data series together, we can begin to make connections between plankton and plastic and possibly determine how much of an impact the plastic debris is having on this part of the marine food chain — it's an incredible opportunity."