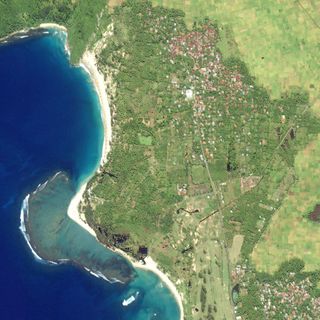 Early 2003: From above, the Indonesian province of Aceh looks like paradise. A tsunami devastated the region on December 26, 2004, turning the once-lovely coastline into a desolate wasteland.
(Image: © USGS, IKONOS.)

Tsunamis leave a destructive and often deadly stamp on land, but they also make a surprising and poorly understood impression high above the Earth.

Now scientists are turning their gaze upward in the hunt for signs of these as-yet mysterious "atmospheric gravity waves" generated by tsunamis, in an effort to gather better data on the potentially devastating ocean-based waves and improve tsunami warning networks. They're using a familiar and ubiquitous tool — GPS — to do it.

"The tsunami very effectively generates atmospheric gravity waves, and because they're fast, those waves can effectively travel to the upper atmosphere," said Michael Hickey, a physics professor and associate dean at Embry-Riddle Aeronautical University in Florida.

Hickey, who works on computer modeling, has teamed up with researchers who are using GPS to observe these tsunami-generated atmospheric waves in an area called the ionosphere, which lies between 50 and 300 miles (80 and 500 kilometers) above the Earth.

Essentially, like an uninvited guest at a party, these tsunami-generated waves go barging into parts of the ionosphere where they're not generally seen, causing a ruckus among the particles that live there. The waves cause anomalies in GPS data, and may allow scientists to someday better pinpoint the origin and magnitude of a tsunami.

"We're not at that stage yet," Hickey cautioned, but said that, eventually, an early warning system is the goal.

From ocean to sky

Tsunami sky waves are a grand affair. The waves can travel higher than 180 miles (300 km) above the Earth, equivalent to a trip from Chicago to Indianapolis. Their peaks and valleys are meters, sometimes hundreds of meters apart; their horizontal wavelengths — the distance from one peak to the next — can be several hundred kilometers.

But when these waves start off, they are tiny.

The force of a tsunami will disturb the air at the ocean's surface by just 3 or 4 centimeters, said David Galvan, of NASA's Jet Propulsion Laboratory in Pasadena, Calif. As the atmospheric waves travel upward, they get larger.

"Because the atmosphere decreases in density as you go up, the air molecules can move much farther without bumping into each other," Galvan explained.

As the wave travels through thinner and thinner material, the larger its oscillations can get.

All this can be illustrated when you make the bed. Try to make waves with a thick blanket and you won't get very far, but try the same experiment with a delicate silk sheet, and the material will elegantly dip and peak.

This is the same phenomenon that produces tsunamis in the first place. The energy produced by an underwater earthquake or subsea landslide is immense, but the disturbance is barely perceptible on the surface of the open ocean because of the vast amount of water through which the energy travels. However, as that energy approaches the shoreline, there's less and less water to carry the energy, and the wave becomes huge.

Galvan is one of the researchers running observational studies with GPS to track the atmospheric waves. He says now that scientists have established that these waves are indeed produced by tsunamis, there's much work to be done in interpreting how to use the atmospheric data to track down the dangerous waves in the ocean.

"These atmospheric gravity waves are kind of capricious," Galvan said. "They appear in some places and not others, and we don't understand why at this point."

Galvan, Hickey and colleagues have just submitted a paper for review that examines this question.

The research is timely. A new report from the National Research Council (NRC), an independent, non-profit organization, is calling for improvements to tsunami detection and early warning systems for the United States.

John Orcutt, a professor of geophysics at the Scripps Institution of Oceanography in San Diego, chaired the committee that authored the report. He says the current network of buoys and seismic instruments the United States now has in place is insufficient, especially since a large tsunami is a very real and looming threat along the Pacific coast.

Orcutt and his committee recommend that GPS, which is capable of sensing both Earth's surface movements and tsunami sky disturbances, should be incorporated into the nation's tsunami detecting infrastructure as soon as possible. "The pieces are all in place," Orcutt said.

One immediate concern is educating the public about tsunami threats.

Orcutt warned that the Cascadia Fault, which lies just off the Pacific Northwest's coastline between northern California and Canada, is strikingly similar to the fault off Sumatra — the fault behind the deadly 2004 tsunami that killed more than 220,000 people worldwide.

"If you feel something," Orcutt said, "don't run to the coastline to see what's happening." Instead, immediately walk to higher ground. Quickly.