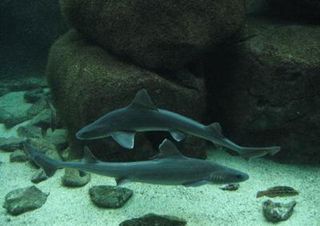 A tiny, little-understood shark species that lives off the coast of Ireland has garnered more attention lately from a scientist who spent four years getting to know the wee creatures.

The sharks grow to 3.3 feet (about 1 meter) in length, can weigh up to 26 pounds (12 kilograms) and each summer they swarm into the shallow waters off the Irish east coast. Yet until researchers at University College Dublin undertook a project to study them, the starry smooth-hound was a mystery.

As part of his Ph.D. project, Edward Farrell, a recent graduate from University College Dublin School of Biology & Environmental Science successfully investigated the age, growth, reproduction and identification of these animals.

"It's amazing how little was known about this species considering their size and abundance on the East Coast," Farrell said. "Until recently we weren't even sure what species we were dealing with, but we developed a genetic method which allowed us to confirm that it is the starry smooth-hound which occurs in Irish waters and not the related common smooth-hound."

Starry smooth-hounds were previously considered to be a fast-growing and early-maturing species. However, the results of the four-year project have revealed that starry smooth-hounds in Irish waters actually grow twice as slowly as previously estimated and only reproduce every two years rather than annually as is the case for their counterparts in the Mediterranean.

With such a slow reproductive rate, unregulated commercial fishing could have a serious impact on the species in a short time.

Starry smooth-hounds are not a valuable commercial species in Ireland, but in Europe they are highly sought after and the landings from French boats, currently about 2,640 tons annually, are increasing. The previous lack of knowledge of their basic life history in the Northeast Atlantic Ocean has prevented the development of management and conservation strategies.

Once abundant in the Mediterranean Sea and Southern European waters, years of overfishing have caused their disappearance from much of their former range. In Irish waters though, starry smooth-hounds seem to be increasing in abundance, for reasons that are currently unknown.

"There are currently no management measures for this species in European waters mainly due to the lack of biological information," Farrell said. "So our main aim was to gather the necessary data. Hopefully this can be used now to ensure their sustainability and prevent a repeat of the overexploitation seen in Mediterranean waters."

The new study of the shark is published in the Journal of Fish Biology.

This articles was provided by OurAmazingPlanet, a sister site of LiveScience.