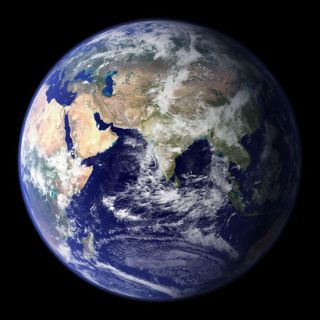 Call it Mother Earth if you like, but "Little Brother" might be a more appropriate nickname for our messy, squirmy and unpredictable planet.

The shape and orientation of Earth are constantly changing. Sometimes the transformation is dramatic, wrought by violent earthquakes and volcanoes. Sometimes, as with the minute gravitational fidgeting that wiggles the planet on its axis, the transformation passes relatively unnoticed.

No matter the scale, the geological tantrums and hiccups that provoke changes in the planet's shape and position can have far-reaching effects, and scientists are trying to keep track of all these changes through a discipline called geodesy.

However, an upcoming report from the National Research Council will warn that the United States must work to maintain and improve the tools necessary for this vital yet obscure field of study.

Geodesy (pronounced gee-ODD-uh-see) is the science that measures the Earth's changing shape, gravity field, and orientation in space. It also pinpoints positions on the planet's surface in relationship with each other. Scientists use geodesy to make more-accurate earthquake predictions, better understand sea-level changes, and gain insight into a range of other natural phenomena.

First glimpse of an imperfect planet

Geodesy has made vast leaps forward in just a few decades, said J. Bernard Minster, chairman of the independent committee that conducted the study.

Perhaps the most obvious sign of improved geodetic tools is in your car (or even your pocket): GPS.

"In the '50s, you could be in the middle of Siberia — or even worse, in the middle of Antarctica — and not know where you were to meters or even kilometers," Minster said. "Today you can be in those places and find out where you are within a meter."

And if you're not moving fast, you can find out down to the centimeter, added Minster, a professor of geophysics at the Scripps Institution of Oceanography in La Jolla, Calif.

Beginning in the early 1960s, satellites allowed scientists to look at the planet as a whole for the first time. "And once you start looking in detail," Minster said, "it turns out the planet is bumpy. Very bumpy."

The Earth is pudgy around the middle because of the way it spins, resulting in a slightly squashed sphere that is wider along the equator than it is from pole to pole. The northern and southern hemispheres also bulge and dip in different ways. "The more detail you get into, the more complication you see," Minster said.

Even the surface of the ocean has its own rolling topography, complete with valleys and hills. And all those features change over time.

"Everything is moving relative to everything else," Minster told OurAmazingPlanet. "Even on land, things move up and down, they move sideways, and by the time you start working at a very high level of precision globally, you need to define 'Here I am, but relative to what?'"

Mapping out battle to mapping earthquakes

Up until the latter half of the 20th century, geodesy was considered a military science. Generals needed to know the literal lay of the land to direct armies and, later, pilot submarines and missiles accurately toward the enemy.

Even GPS satellites, the most public facet of geodesy, were put in place by the Air Force.

Scientists say geodetic infrastructure — everything from satellites and radio telescopes to data-processing systems — remains a key weapon against enemies as dangerous as any invading army, such as floodwaters and volcanoes.

Minster said the technology can be used to improve floodplain mapping so policymakers know where rising waters will flow, fine-tune crash-avoidance systems in cars, and improve volcano and earthquake predictions. "There's no question that we're saving lives," he said.

James Whitcomb, head of the Deep Earth Processes Section at the National Science Foundation, said geodetic tools now allow scientists to peer deep within the Earth and measure tectonic strain, or the stress that builds up between Earth's tectonic plates that eventually can cause a rupture and an earthquake.

"One thing this precise geodesy has enabled us to do that has really revolutionized the practical impact of science on people is to outline the areas where that strain is building up more than others," Whitcomb said, "and this is of great value to earthquake engineers."

However, Whitcomb cautioned, geodesy's potential to prevent the loss of lives is not being fully explored by the United States.

Because of the expense involved in undertaking surveys, data aren't taken frequently or consistently enough, Whitcomb said. Add to that the fact that satellites aren't plentiful enough, and you end up in a situation in which "basically scientists here who try to utilize that data are driven to use data from foreign satellites."

With proper investment, Whitcomb said, satellites could provide a day-to-day, week-to-week picture of how the planet is changing, from its core to its surface, in much the same way that weather satellites track the movement of clouds and the development of storms.

"The thing that struck me when I went through the report is how quickly things have advanced over the last 20 or 30 years," Whitcomb said. "We have gone way beyond what people thought we'd be able to do, and that means we really have the capability for improving our resilience to natural disasters and being able to cope with certain environmental difficulties, probably in ways that we can't even predict yet."

The report on the state of the nation's geodetic infrastructure was conducted by the National Research Council, a nonprofit group. The study, due to be published in the fall, will recommend the development of a centralized authority that can coordinate the disparate aspects of the United States' geodetic tools.