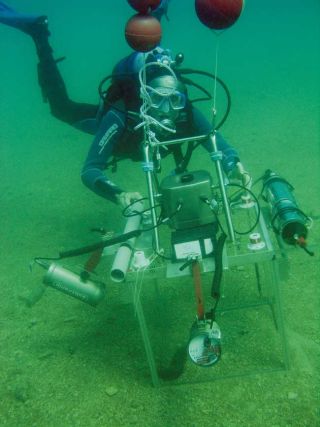 Test deployment of Experimental Anoxia Generating Unit in shallow (12 m) depth. Crossbar (top center) between the two brackets serves to lift and transport the lid as well as an attachment site for buoys to provide neutral buoyancy.
(Image: © University of Vienna)

Predicting the spread of dead zones on the seafloor could get easier if scientists know what to look for in marine life behavior. Their solution: Create a tiny, artificial dead zone that simulates how bottom dwellers fight for survival in an oxygen-deprived environment.

A small Plexiglass chamber simulated what happens in real dead zones, where dying marine life litters the seafloor after suffering oxygen starvation. Researchers placed the experimental module at the bottom of the Adriatic Sea off the coast of Slovenia.

The team then recorded how marine life struggled with their fate about 79 feet (26 meters) below the ocean surface, and made a catalogue of behaviors that could more easily provide warning signs about future dead zones.

"Our approach would allow any camera system (hand-held or sent down on a cable or attached to a remote-operated-vehicle) or divers to observe the bottom and come to conclusions without expensive sensor technologies," said study researcher Michael Stachowitsch, a marine biologist at the University of Vienna in Austria.

By contrast, expensive electronic sensors typically don't even gauge oxygen levels at the bottom of the sea where much marine life exists, Stachowitsch noted. He added that deploying oceanographic buoys also represents a cost-intensive effort, which involves technicians, and servicing and satellite fees.

Inside the dead zone

In any case, marine biologists want better monitoring of dead zones, where dissolved oxygen in bottom waters is very low to zero, around the world. Pollution and warming seas have already led to dead zones covering a combined area about the size of Wyoming.

Such areas often arise because of nutrient runoff from fertilizers that can lead to an explosion of algae blooms. The algae eventually dies and attracts bacteria that end up using most of the oxygen supply, which triggers mass death in the water.

The Experimental Anoxia Generating Unit (EAGU) creates oxygen deprivation by sealing off a cubic volume almost 20 inches (50 cm) on each side. Its Plexiglass lid holds a time-lapse digital camera that takes images every six minutes, and also contains sensors that measure oxygen level and pH (the level of acidity of the water) every minute.

Researchers gathered at the Marine Biology Station in Piran, Slovenia, to deploy the boxy device. Two divers set up the EAGU so that it could monitor its artificial dead zone for up to five days at a time.

"In the lab, you can put an animal into a glass jar and record its reactions to dropping oxygen values," Stachowitsch said in an e-mail. "This will tell you very little about what that animal might actually do in the real environment, or what might happen to it in the framework of the surrounding community."

In one case, the team discovered that creatures less sensitive to oxygen deprivation, such as sea anemones, could consume more sensitive creatures such as brittle stars – at least for a time before oxygen levels dropped below what any organism could tolerate.

The early efforts have paid off so far, despite difficulties working underwater with delicate instruments.

"This is not a theoretical approach or a desk job," Stachowitsch said. "The depth is rather deep for regular SCUBA work, and the visibility is poor at the bottom, and we are at the mercy of winds and waves."

But such work becomes necessary if scientists want to understand how certain ecosystems serve the greater marine ecology, Stachowitsch said. For instance, the bottom feeders, such as mussels, sponges, brittle stars and anemones, typically filter water and remove particles of food, and their loss can lead to more deaths among marine life.

Humans also need to figure out the value of such ecosystems, and how much it might cost to replace them with technological solutions if the natural system collapses, according to Stachowitsch.

"Today, everyone is talking about bacteria, viruses, genomics, proteomics ... but is knowledge about these things going to save our planet and save us?" Stachowitsch said. "As interesting intellectually as many of these topics are, my answer is an emphatic 'No.'"