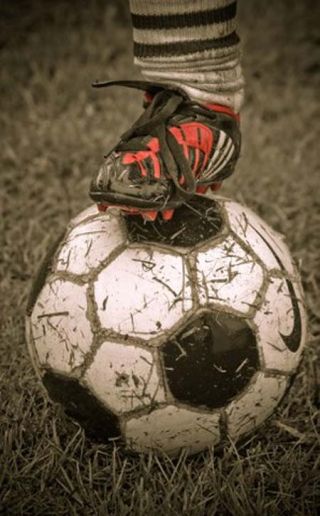 Scientists have found a way to to measure and rank the success of soccer players based on an objective measure of performance instead of opinion.
(Image: © 1Happysnapper (photography) / Nina, Creative Commons Attribution 2.0 Generic)

When trying to perfect a golf swing or basketball shot you might do best to practice various related tasks rather than focusing on a certain drill, a new study suggests.

Past research has shown mixing up one's training regimen, which can involve, say, practicing chip shots and longer drives, is better at improving the brain's memory of most skills than drills focused on a single task. Now scientists have figured out the neural basis of this paradox.

The researchers divided 59 volunteers into groups in which some participants practiced a challenging arm movement while others practiced the movement and related tasks in a variable practice structure. "In the variable practice structure condition, you're basically solving the motor problem anew each time. If I'm just repeating the same thing over and over again as in the constant practice condition, I don't have to process it very deeply," said study senior author Carolee Winstein, professor of biokinesiology and physical therapy at USC. "We gravitate toward a simple, rote practice structure because we're basically lazy, and we don't want to work hard," Winstein said. "But it turns out that memory is enhanced when we engage in practice that is more challenging and requires us to reconstruct the activity."

The researchers found support for this reasoning using transcranial magnetic stimulation — a noninvasive procedure that disrupts brain activity — after practice.

Volunteers in the variable practice group who received magnetic stimulation in the prefrontal cortex failed to retain or "consolidate" the arm movement as well as those in the same group without magnetic stimulation. This implied the prefrontal cortex, a brain region associated with higher level planning, was necessary for consolidating the memory.

Likewise, constant practice volunteers who received magnetic stimulation in the primary motor cortex did not retain the arm movement as well as volunteers in the same group who didn't get magnetic stimulation. The primary motor cortex is a region of the brain linked to simple motor learning. "While it may be harder during practice to switch between tasks … you end up remembering the tasks better later than you do if you engage in this drill-like practice," Winstein said.

The research is detailed in the July 11 issue of the journal Nature Neuroscience.