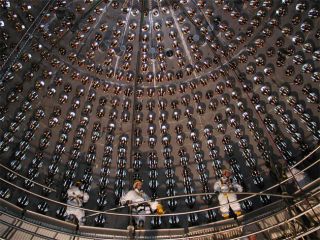 This stainless steel sphere is part of a neutrino detector located nearly a mile below the surface at the Gran Sasso National Laboratory of the Italian Institute of Nuclear Physics.
(Image: © Paolo Lombardi INFN-MI)

Exotic antimatter particles have been detected deep within the Earth's interior, scientists report.

Studying these particles, which are thought to result from radioactive decay within Earth, could help scientists better understand how the flow of heat inside our planet affects surface events like volcanoes and earthquakes.

The particles, called geoneutrinos, are made of a strange type of matter called antimatter, which has properties opposite those of regular matter. When a regular particle, like an electron, meets with its antimatter partner, called a positron, the two annihilate each other in an energetic explosion.

Geoneutrinos are the antimatter partners of neutrinos, which are very lightweight, neutrally charged particles that are created within the sun and when a cosmic ray strikes a normal atom. An earlier project called KamLAND in Japan found the first signs of possible geoneutrinos in 2005.

Researchers in the Borexino collaboration at the Gran Sasso National Laboratory of the Italian Institute of Nuclear Physics discovered the geoneutrinos inside a nylon sphere detector containing 1,000 tons of a hydrocarbon liquid. This sphere is encased within a larger stainless steel sphere in which an array of ultrasensitive photodetectors point at the inner nylon globe. Both of these layers are enclosed within a third 45-foot (13.7-m) diameter steel sphere holding 2,400 tons of highly purified water.

The whole experiment is buried nearly a mile (1.6 km) below the surface of the Gran Sasso mountain in Italy. [Image of giant steel sphere]

All of these fortifications serve to shield the experiment from detecting anything other than neutrinos and geoneutrinos. These particles are incredibly difficult to find, because they pass through almost everything without interacting in any way. Over a whole year of searching for the elusive geoneutrinos, the experiment detected only a few signals. The detection of solar neutrinos, which produces a different pattern, is somewhat more common.

The researchers detailed their results from two years of operations – running through December 2009 – in a paper published in the April issue of the journal Physics Letters B.

"This is an important result," co-researcher Frank Calaprice, a physicist at Princeton University in New Jersey, said in a statement. "It shows that geoneutrinos have been detected and firmly establishes a new tool to study the interior of the Earth."

Geoneutrinos are thought to be formed from the radioactive decay of uranium, thorium and potassium inside the Earth's crust (its outermost layer) and mantle (the layer below that, extending to 1,800 miles, or 2,900 km, beneath the surface).

The researchers hope that by studying geoneutrinos, they can learn more about how decaying elements add to the heat beneath Earth's surface and affect processes like convection in the mantle. Whether radioactive decay dominates the heating in this layer, or merely adds to the heat from other sources, is an open question.

Convection is a process of heat-driven mixing that pushes a flow of hot rock from deep in the interior up to the planet's surface. This drives plate tectonics, shifting the continents, spreading the seafloor, and causing volcanoes to erupt and earthquakes to tremble.

The results of the new study suggest the radioactivity within Earth probably contributes a significant fraction of the heat in the mantle, Calaprice said.