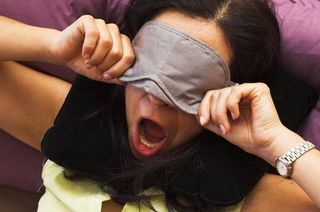 WASHINGTON (ISNS) -- Human beings aren't built to cross time zones. After an international flight, it takes days for the body to overcome the fatigue and nausea of jet lag, the biological price of doing business in the modern world. That's because every organ keeps time with its own separate clock. Though the brain tries to synchronize all of these clocks on a daily basis, some are more stubborn about resetting than others when adjusting to a new time zone and sleep schedule -- according to a new study of sleep-deprived mice, which have internal clocks similar to ours. "Jet lag is a big mess of different clocks," said Gregor Eichele of the Max Planck Institute of Biophysical Chemistry in Gottingen, Germany. A transcontinental traveler's brain may adjust to being in Paris the day after his flight touches down. But his pancreas may continue to tick away on New York time, while his kidneys count the seconds somewhere over the Atlantic Ocean. Genetic Clockwork To study these clocks and develop a way to treat jet lag, Eichele woke up a group of laboratory mice six hours earlier than usual -- simulating an eastward flight from Chicago to London with the flip of a light switch. He then measured changes in their gene activity as their bodies adjusted over the following 8-9 days. Genes are the gears that run our internal clocks. All of our organs possess the same ten or so "clock" genes, which govern the production of molecules that keep time in a regular rhythm. But though the liver, the skin, and the brain share the same genetic clockwork, they each run on their own clock independent of the others. In sleep-deprived mice, some of these molecular clocks adapted more quickly than others. Those in the pancreas -- which regulates the body's production of energy -- resisted the change for days longer than those in kidneys, for example. When the molecular clocks of different organs are significantly out of synch, bodily functions that require chemical communication can be disrupted. Eichle said that could explain the diverse symptoms of jet lag, which range from insomnia and depression to gastrointestinal problems. Studies have shown that the brains of aircraft crew who experience chronic jet lag tend to shrink and make more stress hormones, and the menstrual cycles of female flight attendants are disrupted by regular international flights. "We know that chronic jet lag causes stress and impacts our health," said Kei Cho, a neuroscientist the University of Bristol in the U.K., who discovered these effects. "This new research addresses one of the biggest questions in biology -- how the genes are changed by disturbances to the sleep and wake cycle." Jet Lag Resistant Mice Searching for new ways to combat jet lag, Eichle examined one of the fastest adapting clocks -- the adrenal glands. These glands are thought to work with the brain to provide a master clock that synchronizes all of body's clocks on a daily basis. Using a drug that temporarily blocks the activity of adrenal glands, Eichle and his team created a batch of jet lag-resistant mice. A small dose administered a day before their sleepless ordeal set their adrenal gland clocks back by an hour -- allowing their organs to begin the process of adjusting and reducing the time it took them to adapt to an earlier wake-up call by two or three days. "Nobody has really ever achieved this before," said Eichle, who published the research on June 23 in the Journal of Clinical Investigation. "It's a first step in the right direction towards a treatment for jet lag." Don't expect to see this drug on the shelf any time soon -- the U.S. Food and Drug Administration has yet to approve a drug for jet lag, and the risks of tinkering with the body's clocks are significant. "Honestly, we don't know what all of these clock genes do in the body," said Cho. "If we try to manipulate something, the side effects might be more than we expected." For now, the best cure for jet lag is still the slowest: one day of rest for every time zone crossed.