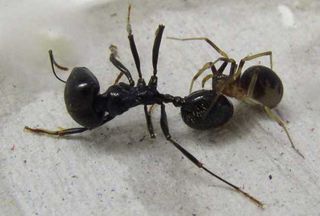 A lucky Zodarion rubidium spider gets a massive ant meal. This spider slurps out the tissue of the protein-rich front parts of an ant first before chowing on the fatty rear segment, or gaster, as shown here.
(Image: © Stano Pekár)

A spider that only eats ants is choosy about which body parts of its prey it devours based on their nutritional value.

These new findings are the first to demonstrate that "specialist" predators relying on a single food source might have evolved feeding behaviors to maximize what they get out of meal time, the researchers say.

"We found that these spiders do have to balance their nutrient intake by choosing different body parts of their exclusive ant prey," said Stano Pekár, an assistant professor of ecology and zoology at Masaryk University in the Czech Republic and lead author of the research published in the April 15 issue of the journal Animal Behaviour.

When chowing down on ants, the spiders consistently began with the protein-packed front parts before getting to the fattier hind segment, called a gaster or abdomen. The picky eating seemed to pay off: Spiders reared on just front-end ant pieces grew faster, bigger and lived longer than those served only gasters or even whole ants.

Yet when given the option, spiders still gobbled on the gaster rather than shunning it entirely for the front parts, hinting that the gaster contains vital nutrients not found elsewhere in the ant's body.

For the experiments, the researchers collected dozens of Zodarion rubidum, an ant-eating spider species found in Europe and the United States that has a light orange head and legs.

These spiders attack ants and inject them with powerful venom that paralyzes the prey in mere minutes.

When settling in for an ant banquet, Zodarion spiders puncture the insects' hard exoskeletons with fangs and inject enzymes that "liquefy the inner tissues," Pekár said. The spiders slurp out this mush before moving to different areas of the carcass. These spider eating sessions last from two to four hours.

To see how well the spiders lived on particular pieces of an ant, the researchers divided 60 of the arachnids into three dining clubs that were given the ants' front end (head, legs and thorax or mid-body), gasters or whole ants. Each group received a similar portion of fresh ant flesh by weight.

The spiders given only gasters fared poorly: All 20 died within six weeks of the start of the experiment, whereas eight of the spiders dining on front parts and three on whole ants were still alive and kicking at the experiment's end three months later.

When alive, the spiders kept on the gaster-only diet initially grew but then shriveled, while those eating the head, legs and thoraces thrived, with some tripling their weight. The spiders devouring entire ants also did well, but did not develop as fast or get as big as the front-end eaters.

The choicer parts of an ant

To find out whether the spiders had ant-part preferences, the researchers gave 48 spiders small, medium or large whole ants.

"When we provided [spiders] access to the entire prey, they responded by consistently choosing to feed first and mostly on the head and thorax," Pekár and his co-authors wrote.

Even when given gigantic ants that provided more than enough sustenance in the front-end parts alone, nearly all of the spiders spent at least an hour munching on the fatty ant derrieres.

"We thought maybe the spiders could live only on the protein" found up front, Pekár said, but after working over the thoraces and legs, the hungry spiders "always went for the gaster." This behavior implies that the gaster contains some essential nutrients not found elsewhere in the ant, but that protein is the priority.

While spiders given the protein-rich regimen fared best in the experiment, Pekár suspects those with a more well-rounded diet would ultimately do better. Having sucked out all they could from the front parts, the spiders with a whole ant might have over-gorged on the leftover gasters and done themselves a nutritional disservice during the short experiment, Pekár said.

The findings jibe with the emerging view that for predators, achieving proper nutrition is trickier than simply finding enough prey to eat.

As for why cheetahs eat particular portions of a gazelle, for example, the thinking had been that the "cheetah did not consume the entire gazelle, because he was stuffed by half of it," Pekár told LiveScience. "But now we see that this is not the full truth. The cheetah did not consume some muscles of the gazelle because he was [already] stuffed with proteins, for example."

"Nutrition is one of the most important things that animals do," said David Raubenheimer, a professor of nutritional ecology at Massey University in Auckland, New Zealand who has not involved in the study. "I would expect them to evolve the ability to capitalize on any opportunity they have for getting the best they can."