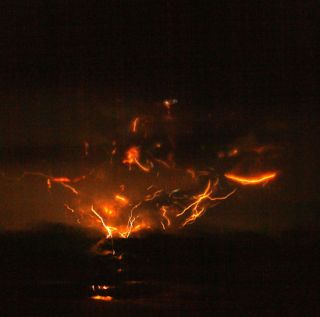 Scientists have pierced the veil of clouds around a volcanic plume to "see" lightning.
(Image: © Bretwood Higman)

Sandstorms can generate spectacular lightning displays, but how they do so is a mystery.

By unlocking the secrets of how sparks come to fly in these storms as researchers are now doing, scientists could help grapple with all kinds of problems, from charged particle clouds that can cause devastating explosions in the food, drug and coal industries to charged dust that could obscure vital solar panels on missions to the moon or Mars.

Sand is an insulator, so seeing sandstorms generate lightning would be somewhat like watching electricity emerge from a storm full of rubber balls. It has been an enigma for more than 150 years as to how sand grains can transfer the huge amounts of electrical charge needed for lightning to happen.

"It really is quite surprising to me that despite our illusions, we really don't understand the simplest of effects that led Faraday, Kelvin, Maxwell and others to study electromagnetism in the first place," said physicist Troy Shinbrot at Rutgers University.

Now Shinbrot and his colleagues think a simple new model could help solve one aspect of this mystery.

"We are returning to the roots of physics, and we are finding them rich with unexplored behaviors that have languished for centuries," Shinbrot said.

Assuming the presence of an electric field, round particles within the field made of insulators become polarized — that is to say, electric charge gathers on each side of the spheres. When two such particles bounce off each other, the charges in each sphere get rearranged so that each is twice as polarized as before. As these particles recoil off each other again and again, huge amounts of charge could get transferred even in the absence of any kind of conducting medium.

This model predicts thin clouds of dust would only build up weak charges, which makes sense, as thin clouds only have a few particles to collide together. Surprisingly, however, thick clouds with many particles also build up only weak charges as well, due to a phenomenon dubbed "granular collapse."

"In a thick cloud, particles collide with many neighbors, but since each collision costs energy, particles rapidly lose energy, and a detailed calculation reveals that each particle in a thick cloud endures fewer collisions per unit time than in a moderate thickness cloud," Shinbrot said. "This 'embarrassment of riches' is not intuitive, yet computations, simulations and experiments seem to confirm the effect."

However, in intermediate clouds, dramatic charging can result. Experiments the researchers performed with colored glass beads and electric fields support their model.

Putting it to use

These findings could lead to methods to disrupt any unwanted charges from building up — "for example, in an industrial plant, where charged particles can lead to dangerous explosive conditions," Shinbrot said.

First, one could apply a modest electric field to attract the charged particles down onto surfaces to neutralize their charge. Second, one might be able to figure out ways to minimize charging within dust clouds — for instance, one might seed a cloud with custom-engineered particles that can help quench charging.

One mystery remains — what in nature generates the electric field that polarizes the sand in the first place?

"External fields from nearby thunderstorms for example are recorded to charge grains, but in the desert there is typically no such external source," Shinbrot said. "This is an unanswered question."

Shinbrot and his colleagues detailed their findings online April 11 in the journal Nature Physics.