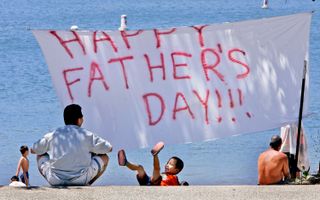 This year, Father's Day falls on Sunday, June 17, so get ready to treat your dad with some terrific treats and family time. But Father's Day wasn't always on the third Sunday of June, so how did it get its start?

The idea of Father’s Day was conceived by Sonora Dodd of Spokane, Washington, while she listened to a Mother’s Day sermon in 1909, according to the U.S. Census Bureau. Dodd wanted a special day to honor her father, William Smart, a widowed Civil War veteran who was left to raise his six children on a farm after his wife died during childbirth.

Dodd encouraged local churches to celebrate the day, and she was so successful that Spokane’s mayor proclaimed the first Father's Day on June 19, 1910, according to the Library of Congress. Dodd chose June because it was her father's birth month. [Doting Dads: 6 of History's Finest Fathers]

President Calvin Coolidge took it a step further in 1924, when he made a national event to "establish more intimate relations between fathers and their children and to impress upon fathers the full measure of their obligations," according to the Library of Congress. But Father's Day didn't become official until 1966, when President Lyndon Johnson issued the first presidential proclamation designated to honor fathers on the third Sunday of June.

Father’s Day has been celebrated annually since 1972, when President Richard Nixon signed the public law that made it permanent.

Some discoveries to ponder on Father's Day:

72.2 million: Estimated number of fathers in the United States today.

29.2 million: Fathers who are also grandfathers in the United States.

Roughly 6 in 10 men in the United States are fathers.

54 percent of fathers have only adult children who are at least 18 years old.

46 percent of men have at least one minor child who is younger than 18 years old.

Of the 35 million fathers of minor children, about 1.7 million (about 2 percent) are single fathers.

Editor's note: This article was originally published on June 17, 2006. It was updated to include new data about fathers in the United States.