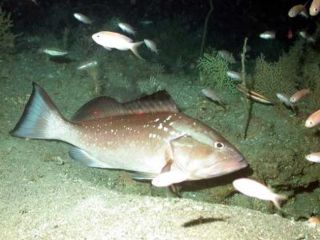 Red groupers were known to excavate structures in the sand in the Gulf of Mexico and along the Southeast U.S. coast, but until now scientists had no idea just how talented and resourceful the fish are.

The groupers excavate and maintain complex holes and, in the process, remove sand from the sea floor, exposing rocks. The fish restructure the flat seafloor into a 3-D matrix, with the newly bared rocks encouraging the settlement and growth of corals and sponges, scientists discovered.

The whole setup provides shelter to spiny lobsters and other fish, including dinner for the grouper, which kicks back and enjoys the fruits of its labor.

"The sites they created served to attract mates, beneficial species such as cleaner shrimp that pick parasites and food scraps off the resident fish, and a variety of prey species for the red grouper," said Felicia C. Coleman, director of Florida State University's Coastal and Marine Laboratory. "So it is no surprise that the fish are remarkably sedentary. Why move if you are clever enough to make everything you need come to you?"

The findings, announced this week, were published online Jan. 9 in The Open Fish Science Journal.

"Red grouper are the 'Frank Lloyd Wrights' of the sea floor," said University of California-Davis professor Susan Williams, who collaborated with Coleman on an earlier, related study. "We found through a series of experiments that they not only dug the holes but also maintained them by carrying mouthfuls of sediment from the center of the pit to the periphery and expelling them through their gills and mouths, then brushing off the rocks with their tail fins."

The findings are useful in showing how important the red grouper is as part of an interconnected ecosystem.

"Its sea-floor associates include commercially valuable species such as vermilion snapper, black grouper and spiny lobsters," Williams said. "If the groupers are overfished, the suite of species that depends on them is likely to suffer."