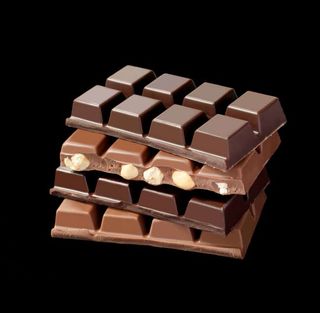 Go ahead, grab a chocolate bar. New evidence is in that eating dark chocolate every day can reduce stress.

The study, announced today, found that people who rated themselves highly stressed to begin with had lower levels of stress hormones after eating chocolate every day for two weeks. The study's subjects ate 1.4 ounces (40 g) of dark chocolate daily, or a little less than a regular-sized Hershey's bar, which contains 1.55 ounces (44 g).

The doctors took urine and blood plasma samples from the participants at the beginning, halfway through, and at the end of the two week study, and found lower levels of the stress hormones cortisol and catecholamines in the samples at the end.

The study was small, however — just 30 people — so further research is needed to verify the results.

The scientists, led by Sunil Kochhar of the Nestle Research Center in Switzerland, detailed their findings in the Oct. 7 issue of the Journal of Proteome Research.

"The daily consumption of dark chocolate resulted in a significant modification of the metabolism of healthy and free living human volunteers with potential long-term consequences on human health within only 2 weeks treatment," the researchers wrote in the paper. "This was observable through the reduction of levels of stress-associated hormones and normalization of the systemic stress metabolic signatures."

The study adds to a growing body of research showing that certain elements in chocolate — such as antioxidants called polyphenols — can have helpful health benefits. Previous studies found chocolate can help fight heart disease and reduce the chances of developing cancer.

Of course, moderation is key. Since most chocolate products contain fat and sugar, it's possible to have too much of a good thing.