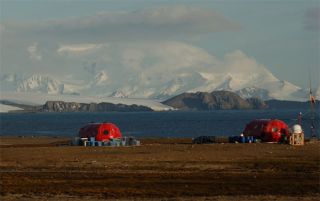 A lake in Antarctica was found to harbor a surprising variety of viruses. Here, an image of the Spanish, non-permanent camp in Byers Peninsula (Livingston Island, Antarctica).
(Image: © Science/AAAS.)

Antarctica's icy lakes are home to a surprisingly diverse community of viruses, including some that were previously unidentified, a new study finds.

At first glance, Antarctica's freshwater lakes don't seem very hospitable to life. They remain frozen for a good nine months out of the year, and they contain very few nutrients. Some of these lakes have little animal life and are dominated by microorganisms, including algae, bacteria, protozoans and viruses.

With few animal and microbial predators around, viruses likely play an important role in controlling the abundance of other microorganisms, the researcher say. However, these viruses have been historically hard to study since many cannot be grown in a laboratory. But thanks to new genome sequencing technology, scientists can identify viruses without needing to grow them.

"We are just starting to uncover the world of viruses, and this is changing the way we think about viruses and the role they play in microbial ecosystems," said Antonio Alcami, a researcher from the Spanish Research Council.

A virus is little more than a package of DNA surrounded by a capsule structure. To survive, viruses must hijack, or infect, living cells and use the host's equipment to replicate.

Alcami and his colleagues analyzed DNA from viruses found in water samples collected from Antarctica's Lake Limnopolar, a surface lake on Livingston Island. They found nearly 10,000 species, including some small DNA viruses that had never before been identified. In total, the viruses were from 12 different families, some of which may be completely new to science, the researchers suggest.

The results reveal this Antarctic lake supports a virus community that's more diverse than most aquatic environments studied in the world so far — a surprising find considering that the polar region is generally thought to have low biological diversity due to the extreme environmental conditions. The scientists speculate the newly discovered viruses may have adapted specifically to thrive in such harsh conditions.

The team also found the community of viruses changed dramatically depending on the season. When the lake was ice-covered in the spring, the liquid water under the ice was inhabited by mostly small viruses, but in the summer months when the ice melted, the lake was home to mostly larger viruses.

"It looks like a completely different lake in summer," Alcami said. The scientists think the shift might be due to an increase in algae in the summertime, which the larger viruses infect.

The researchers hope to figure out whether any of the viruses are unique to Antarctica. If so, that would shed light on whether microbial life evolved independently in Antarctica, which has been isolated for millions of years, or they were introduced there more recently.

The paper was published in the Nov. 6 issue of the journal Science.