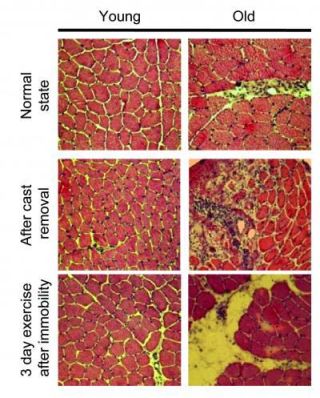 Young, healthy muscle (left column) appears pink and red. In contrast, the old muscle is marked by scarring and inflammation, as evidenced by the yellow and blue areas. This difference between old and young tissue occurs both in the muscle's normal state and after two weeks of immobilization in a cast. Exercise after cast removal did not significantly improve old muscle regeneration; scarring and inflammation persisted, or worsened in many cases.
(Image: © Morgan E. Carlson and Irina M. Conboy, UC Berkeley)

Scientists have found and manipulated body chemistry linked to the aging of muscles and were able to turn back the clock on old human muscle, restoring its ability to repair and rebuild itself, they said today.

The study involved a small number of participants, however. And the news is not all rosy.

Importantly, the research also found evidence that aging muscles need to be kept in shape, because long periods of atrophy are more challenging to overcome. Older muscles do not respond as well to sudden bouts of exercise, the scientists discovered. And rather than building muscle, an older person can generate scar tissue upon, say, lifting weights after long periods of inactivity.

The findings are detailed today in the European journal EMBO Molecular Medicine.

"Our study shows that the ability of old human muscle to be maintained and repaired by muscle stem cells can be restored to youthful vigor given the right mix of biochemical signals," said study leader Irina Conboy of the University of California, Berkeley. "This provides promising new targets for forestalling the debilitating muscle atrophy that accompanies aging, and perhaps other tissue degenerative disorders as well."

More research would be needed before any anti-aging products might result from the work, however.

Scientists know that muscles deteriorate rapidly in old age. Mechanisms that prevent muscle breakdown work less effectively in people over the age of 65, a study earlier this month found. Other research has shown that neurons have to yell louder to kick aging muscles into gear.

Yet much about how and why muscles respond to exercise, and atrophy without it, remains unknown.

Previous research in animal models led by Conboy revealed that the ability of adult stem cells to do their job of repairing and replacing damaged tissue is governed by the molecular signals they get from surrounding muscle tissue, and that those signals change with age in ways that thwart tissue repair. But the animal studies also showed that the regenerative function in old stem cells can be revived.

Meanwhile, there is no fountain of youth for aging muscles. The best advice for now: Eat well and exercise regularly throughout life.

In the new study, a team of researchers compared samples of muscle tissue from nearly 30 healthy men. The young group ranged from age 21 to 24 and averaged 22.6 years old, while the older group averaged 71.3 years old, ranging from 68 to 74.

Muscle biopsies were taken from one quadriceps (upper leg muscle) of each test subject, who then had that leg immobilized in a cast for two weeks to simulate muscle atrophy. After the casts were removed, the men lifted weights to regain muscle mass. More muscle tissue samples were taken.

Analysis showed that before the legs were immobilized, the adult stem cells responsible for muscle repair and regeneration were only half as numerous in the old muscle as they were in young tissue. (Muscle stem cells produce other muscle cells.) The disparity increased during exercise, with younger tissue having four times more regenerative cells compared with the old muscle.

Muscles of the older participants showed signs of inflammation and scar tissue formation during immobility and again four weeks after the cast was removed.

"The old muscle also didn't recover as well with exercise," Carlson said. "This emphasizes the importance of older populations staying active because the evidence is that for their muscle, long periods of disuse may irrevocably worsen the stem cells' regenerative environment."

The researchers warned that in the elderly, rigorous exercise after immobility can cause replacement of functional muscle by scarring and inflammation.

Previous studies have shown that adult muscle stem cells have a receptor called Notch, which triggers growth when activated. Those stem cells also have a receptor for the protein TGF-beta that, when excessively activated, sets off a chain reaction that ultimately inhibits a cell's ability to divide. In aging mice, the decline of Notch and increased levels of TGF-beta ultimately block the stem cells' ability to rebuild muscle.

The new study found the same process at work in humans. But it also revealed that an enzyme called mitogen-activated protein kinase (MAPK) regulates Notch activity.

In old muscle, MAPK levels are low, so the Notch pathway is not activated and the stem cells no longer perform their muscle regeneration jobs properly, the researchers said.

In the lab, the researchers cultured old human muscle and forced the activation of MAPK. The regenerative ability of the old muscle was significantly enhanced, they report.

"In practical terms, we now know that to enhance regeneration of old human muscle and restore tissue health, we can either target the MAPK or the Notch pathways," Conboy said. "The ultimate goal, of course, is to move this research toward clinical trials."

The research was supported by the National Institutes of Health, the California Institute of Regenerative Medicine, the Danish Medical Research Council and the Glenn Foundation for Medical Research.