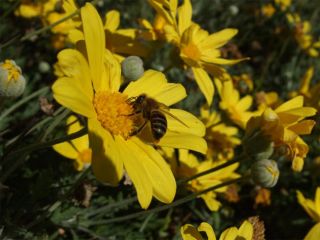 A honeybee (Apis mellifera) forages for pollen on a daisy-like flower in a cultivated garden on a winter day in Africa.

The petals of most flowers are covered with cells in the unusual shape of cones, the pointy ends jutting up. But why? Researchers in England have shown that those cells let insects get a grip on unsteady flowers while gathering nectar and pollen.

Heather M. Whitney, at the time a researcher in Beverley J. Glover’s lab at the University of Cambridge, and two colleagues took advantage of a mutant line of snapdragons that have flowers paved with flat, rather than conical, cells. The team first found that bees could learn to distinguish mutant flowers from normal ones by texture alone. Then they enticed the bees with a sugary reward to visit epoxy casts of smooth and rough flower surfaces.

When the casts’ surfaces were horizontal, the bees visited the two equally, but when they were nearly vertical, the bees much preferred the rough one. High-speed video showed bees flailing for a grip, wings beating, as they slipped down the smooth surface, but alighting easily on the rough one.

The scientists point out that even some flowers pollinated by hovering animals—moths, hummingbirds, and the like—have conical surface cells. Indeed, in addition to providing traction, the cells contribute to the richness of a petal’s color: the mutant snapdragons were first noticed because of the washed-out pink of their flowers, a result of their unusually flat petals’ reflecting more light than normal.

The findings were detailed in the journal Current Biology.