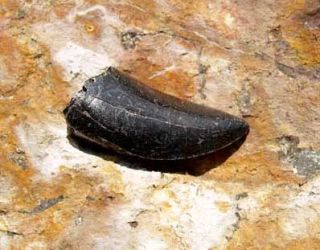 A dinosaur tooth discovered along what's now the Kakanaut River of northeastern Russia. The tooth shows dinosaurs once lived above the Arctic Circle.
(Image: © Pascal Godefroit)

You know the scenario: 65 million years ago, a big meteor crash sets off volcanoes galore, dust and smoke fill the air, dinosaurs go belly up.

One theory holds that cold, brought on by the Sun's concealment, is what did them in, but a team of paleontologists led by Pascal Godefroit, of the Royal Belgian Institute of Natural Sciences in Brussels, argues otherwise. Some dinosaurs (warm-blooded, perhaps) were surprisingly good at withstanding near-freezing temperatures, they say.

Witness the team's latest find, a diverse stash of dinosaur fossils laid down just a few million years before the big impact, along what's now the Kakanaut River of northeastern Russia. Even accounting for continental drift, the dinos lived at more than 70 degrees of latitude north, well above the Arctic Circle.

And they weren't lost wanderers, either. The fossils include dinosaur eggshells — a first at high latitudes, and evidence of a settled, breeding population.

It's true the Arctic was much warmer back then, but it wasn't any picnic. The size and shape of fossilized leaves found with the bones enabled Godefroit's team to estimate a mean annual temperature of 50 degrees Fahrenheit, with wintertime lows at freezing.

Yet there is more than one way to skin a dino. All that dust in the atmosphere must have curtailed photosynthesis everywhere, weakening the base of the food chain and inflicting starvation, and finally extinction, upon the dinosaurs.

The research was detailed in the journal Naturwissenschaften.