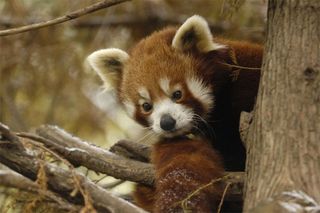 A threatened species native to the Himalayas is helping to shed light on how we taste sugary sweet foods — researchers have found that red pandas unexpectedly have a sweet tooth for aspartame.

While we humans are fond of candy, cookies and other sweet treats, not all animals are subject to the same sugar cravings.

For example, cats — both domestic and wild — can't taste sweetness. The missing taste is the result of a defect in one of the genes that codes for the sweet taste receptors on animal tongues, previous research has shown.

Studying how the structure and function of the sweet receptor gene varies from species to species and tying that to the foods that those species (and even particular individuals) prefer can help researchers understand our own taste preferences. This research could also lead to the development of more appealing sugar substitutes in foods, said Joseph Brand of the Monell Chemical Senses Center in Philadelphia.

"The taste world of every species, and even every individual, is unique, defined in part by the structure of their taste receptors," said Brand's colleague Xia Li, a geneticist at Monell. "We need to know more about these differences and how they influence our diet."

Brand and his colleagues tested the taste preferences of six related species (all from the Order Carnivora) — red panda, ferret, genet, meerkat, mongoose and lion — at two zoos in Switzerland. The species vary in their natural diets, from lions which eat only meat, to the insectivore meerkats, to the herbivorous red pandas, which chomp on bamboo leaves and shoots.

The researchers tested the taste preferences for six artificial and six natural sugars. Each animal was given access to a sweet solution and water for 24 hours. If the animal drank more of the sweet solution, that was taken as a preference for it.

As expected, the lion, a cat, did not prefer any of the sweet solutions. The remaining species preferred at least some of the natural sugars. But surprisingly, the red panda drank large amounts of the artificial sweeteners aspartame, neotame and sucralose. Before this study, detailed online on April 14 in the Journal of Heredity, only primates were known to have a taste for non-natural sugars.

Genetic analysis of DNA from all the species showed that the red panda's sweet receptor had a unique structure.

"This may explain why the red panda is able to taste artificial sweeteners," Li said. "What we don't know is why this particular animal has this unusual ability. Perhaps the red panda's unique sweet receptor evolved to allow this animal to detect some compound in its natural food that has a similar structure to these sweeteners."