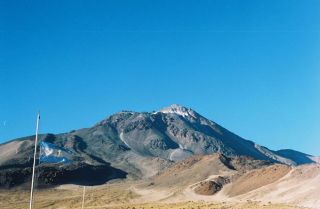 Volcanic gases rising from the 19,850-foot-high Socompa volcano in the Andes are fueling the world’s highest known microbial ecosystems with carbon dioxide, water and methane to create tiny greenhouses, according to University of Colorado at Boulder researchers.
(Image: © Steve Schmidt, University of Colorado)

Gases rising from deep within the Earth are fueling the world's highest known microbial ecosystems, which are perched on the rim of a 19,850-foot-high Andean volcano along with a few patches of plants, researchers announced today.

The microbes atop Socompa volcano, which straddles the border between Argentina and Chile high in the Atacama Desert, live in an environment more extreme than the microbes living in hydrothermal vents in deep oceans, said one of the scientists who made the discovery, Steve Schmidt of the University of Colorado-Boulder.

Water, carbon dioxide and methane spewing from small volcanic vents near the summit of Socompa sustain the complex microbial ecosystems that are entirely new to science.

These tough microbes face the challenges of a thin atmosphere, intense ultraviolet radiation and harsh climate in their barren, sky-high home.

The conditions atop Socompa are similar to the physical characteristics of Mars, where NASA has been hunting for signs of present or past microbial life, Schmidt said.

The Socompa microbial communities are located adjacent to several patches of green, carpet-like plant communities — primarily mosses and liverworts — discovered in the 1980s by Stephan Halloy of Conservation International in La Paz, Bolivia. Halloy is co-author on the study describing the discovery of the new microbes, which is detailed in the journal Applied and Environmental Microbiology.

"These sites are unique little oases in the vast, barren landscape of the Atacama Desert and are supported by gases from deep within the Earth," Schmidt said. "Scientists just haven’t been looking for microorganisms at these elevations, and when we did we discovered some strange types found nowhere else on Earth."

The team made their discovery by extracting DNA from the soil to pinpoint new groups of microbes. They also reported a new variety of microscopic mite which appears to be the highest elevation that mites have ever been recorded on Earth, Schmidt said.

Small amounts of sunlight, water, methane and carbon dioxide work in concert in the barren soils to fuel microbial life near the small volcanic vents, or fumaroles. Such conditions "relieve the stress" on the high-elevation arid soils enough to allow extreme life to get a toehold, said study team member Elizabeth Costello, also of CU-Boulder.

"It's as if these bacterial communities are living in tiny, volcanic greenhouses," she said.

There is also archeological evidence that ancient Incans once roamed over Socompa, and the remains of three, 500-year-old mummified Inca children were discovered in 1999 atop the nearby Llullaillaco volcano, apparent sacrifice victims.

The expeditions to Socompa, conducted in 2005 and 2009, were funded by grants from the National Geographic Society and the Microbial Observatory Program of the National Science Foundation.