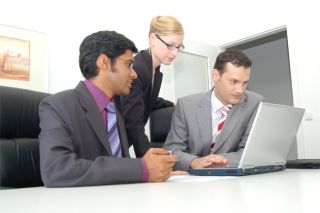 Although many Americans will grumble about going back to work after they barbeque or hit the beach this Labor Day weekend, most will actually be content once they are back in the office. Regardless of complaints about downsizing, dead-end jobs, and burnout, most people in this country are satisfied with their jobs, according to a recent study.

"You hear all of these stories about a growing dissatisfaction with jobs being outsourced and downgraded, which present a negative state of workers," said Tom Smith, director of the General Social Survey at the National Opinion Research Center at the University of Chicago. "But the level of job satisfaction has changed very little in 30 years."

The General Social Survey began in 1972 and is based on interviews with randomly selected Americans, conducted by the National Opinion Research Center/University of Chicago. Interviewers asked participants questions about job satisfaction and general happiness.

The study found that greater fulfillment comes with age, education and income.

According to earlier results of the study, firefighters, the clergy and others with professional jobs that involve helping or serving people are more satisfied with their work and overall are happier than those in other professions.

"Of course, this is on average," Smith told LiveScience. "Some people go through their whole lives being unsatisfied."