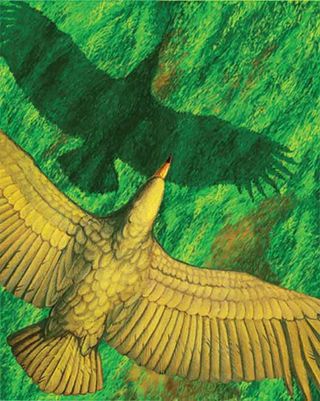 Illustration of the world's largest known flying bird (Argentavis magnificens) with a wingspan of about 23 feet, soaring over the plains of Argentina 6 million years ago.
(Image: © Jeff Martz)

With a wingspan of more than 20 feet, a condor the size of a Cessna airplane relied on updrafts to glide up to 40 mph above the plains of Argentina some 6 million years ago.

Scientists have known the ancient bird could fly. But they didn't know if Argentavis magnificens, the largest bird ever to take to the skies, flapped its wings or simply glided. Now, with computer simulations based on fossil bones of the bird, scientists reveal that wing-flapping alone would not have provided enough power to keep the 150-pound bird aloft.

Instead, the lazy aviator must have hitched a ride from rising columns of air.

Sankar Chatterjee of the Museum of Texas Tech University and his colleagues estimated flight information from Argentavis fossil bones, and they input the data into two computer programs originally used for helicopters.

Flight muscles account for about 17 percent of a bird’s body mass, and the major bulk of that muscle comes from pectoralis, or breast, muscles. However, a bird gains weight faster than its wings can grow. So a big, heavy bird like Argentavis requires more muscle power to stay aloft than a smaller bird.

The scientists calculated Argentavis’s pectoralis muscle would have weighed about 24 pounds, which could not have produced the flapping power needed to carry such a heavy animal through the air.

Like many land birds today, Argentavis could have hopped aboard rising air columns, resulting in little need for wing flapping. Updrafts caused by wind getting deflected upward by a ridge or cliff would have been common along the Andean slopes.

The researchers calculated the feathery giant would sink at a rate of three feet per second. With updrafts of that speed over the Andean slopes common occurrences, the scientists said, Argentavis could stay airborne. The birds also could have taken a “thermal elevator” into the sky. Thermals of rising air can form continuous chimneys or doughnut-shaped bubbles.

“As it reaches the top of the thermal, the bird can glide straight to an adjoining thermal and gain height again by riding the rising air,” the scientists write in a report of their research published online this week in the journal Proceedings of the National Academy of Sciences.

In the Serengeti, vultures can make a round trip of 124 miles by riding these thermal updrafts, all the while scanning the plains for rotting animal carcasses.

With help from rising air, even if Argentavis had been larger, the bird would still have been an expert glider. But no flying bird has been found that is larger than Argentavis, and the scientists think they know why: “The only problem was how to take off from the ground,” Chatterjee said.

Take-off and landing are the most arduous tasks for large birds. This beast could have gained enough lift for take-off by running downhill or launching from a perch while in the midst of even slight headwinds.

Even with these launch tricks, Argentavis was at the size limit for take-off; any larger and the bird would have remained grounded.

“This is probably why we don’t see any flying bird today the size of a jumbo jet,” Chatterjee told LiveScience.

Analysis of the bird’s skull revealed it was a carnivorous predator, similar to other members in its extinct avian family called Teratornithidae, which includes storks and New World vultures. Judging from its giant skull, the bird could snag sizeable prey, the scientists suggest. And since it relied on thermals, which are most prevalent during the daytime, Argentavis was probably a diurnal predator.