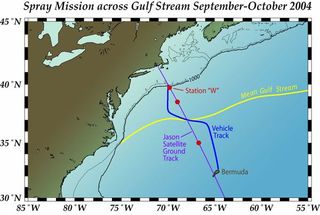 A torpedo-looking device with broad wings has become the first robot to cross the Gulf Stream underwater in a test of self-propelled craft that could conduct long-distance science missions.

Launched in September from Massachusetts, the human-sized glider was picked up by scientists last week just north of Bermuda. It covered about 12 miles a day.

The craft is six feet (2 meters) long and has a 4-foot wing span.

Each day, the robot would thrice plunge to a depth of about 3,300 feet (1,000 meters) and return to the surface, taking measurements all the way. While at the surface, it used the satellite-based Global Positioning System to reorient itself, and it sent data back to researchers on land.

"We have just completed a track across the Gulf Stream and proved we can use gliders to monitor circulation patterns and major currents," said Breck Owens of the Woods Hole Oceanographic Institution in Massachusetts. "We envision having fleets of gliders in operation in a few years. It could change the very nature of the kinds of questions we can ask about how the ocean works."

The robot is called Spray. It has a range of 3,500 miles (6,000 kilometers) -- enough to cross the Atlantic. The project's researchers likened the state of their industry to that of airplanes early last century. There is a long way to go, they say, and much to learn.

"Spray can stay at sea for months at relatively low cost, allowing us to observe large-scale changes under the ocean surface that might otherwise go unobserved," said Russ Davis of the Scripps Institution of Oceanography at the University of California, San Diego.

The robot measures temperature, salinity, pressure, and turbidity, which is an indicator of biological activity. Scientists hope future readings will help them better understand ocean circulation patterns and how they affect global climate.

The mission didn't all go smoothly. Two earlier attempts this year were cut short by malfunctioning equipment, and Spray had to be plucked from the ocean. And during the successful voyage, the robot at one point lost nearly two weeks of progress as the powerful Gulf Stream -- 30 to 60 miles wide -- carried it back North. Each time the robot surfaced, scientists sent it on a slightly new course to get it across the current.

Next year, Spray is slated to make a round-trip journey to Bermuda while equipped with additional instruments to measure the speed of the Gulf Stream at various depths. Eventually, similar robots could be equipped to sample chemicals and nutrients in the water, too.

"Spray gliders can look at entire sections of ocean basins, like the North Atlantic, or serve as virtual moorings by keeping station at a single point," Owens said. "They are fairly inexpensive to build and easy to operate."