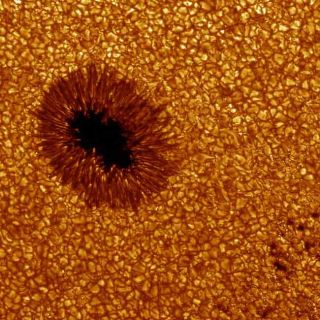 A regular sunspot. Changes in the Sun's magnetic field result in increases in the number and magnitude of sunspots and solar flares, .
(Image: © GÃ¶ran Scharmer and Kai Langhans, Institute for Solar Physics of the Royal Swedish Academy of Sciences)

Variation in the brightness of the Sun is not the major factor behind the unusual warming the Earth has experienced over the past few centuries, a new study suggests.

Researchers traced changes in our parent star's energy output back to the 17th century and found that solar cycles, peaking nearly every 11 years, did not play a significant role in contributing to global warming.

Earth's warming trend, which climate reconstructions show began in the 17th century, has accelerated in the last 100 years. Most studies reveal that this temperature rise could be attributed to the increase of greenhouse gases in the Earth's atmosphere.

In addition to man-made factors, natural inconsistencies in Earth's climate could also play a role in climate change. Additionally, some scientists have speculated that changes in the Sun's brightness affect temperatures on Earth.

About once every 11 years, changes in the Sun's magnetic field result in increases in the number and magnitude of sunspots and solar flares, which bombard Earth with charged particles.

During times of high activity, like in year 2000, the Sun shines about 0.07 percent brighter, researchers report in the September 14 issue of the journal Nature.

The researchers used a combination of data on solar brightness obtained by spacecrafts since 1978 and isotope data --collected from Earth's atmosphere and in ice sheets of Antarctic and Greenland--to recreate the Sun's influence on terrestrial temperatures over the past several centuries.

Although events such as sunspots have increased in the last 400 years, their effect only contributed a small amount to global warming, the results show.

"Our results imply that, over the past century, climate change due to human influences must far outweigh the effects of changes in the Sun's brightness," said study co-author Tom Wigley of the National Center for Atmospheric Research.