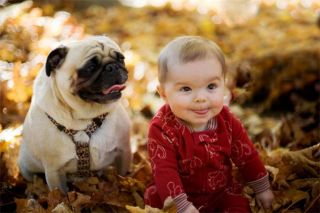 Move over, Fluffy. Baby's on the way.

Pet owners often swear that a new baby won't change how they feel about their cat or dog. But a new study of pet owners in Indiana finds that parenthood does affect the way people think about and treat their domesticated furballs.

The study involved survey questions about how much time people spent with their animals, what they did together, and how often the pets got medical care. The last question was a proxy for how well the animals were cared for.

"In all cases for dogs and cats, except for cats going to the vet, children adversely affected the animals," study researcher David Blouin, a cultural sociologist at Indiana University South Bend, told LiveScience. "People with children spent less time with their animals and took them to the vet less often."

That's not to say that parents neglected or mistreated their pets. It just turns out that the way we view our pets depends a lot on our social context, Blouin said.

Pet ownership is incredibly common in America, with over 60 percent of households claiming at least one pet. The way people interact with their pets has also shifted over time, Blouin said, which made him wonder what other factors make a difference in how people see their relationships with a pet.

To investigate, he mailed surveys to 1,900 dog and cat owners in Indiana.

To find out more about how people felt about their pets, Blouin arranged in-depth interviews with 35 dog owners. He found that people reported intense emotional attachments to their dogs; often, the dogs would sit on the owner's lap throughout the interview.

"It was moving at times to see how attached people were and how much they did get from their relationships," Blouin said.

Blouin's previous research has found three types of pet owners: Dominionists, who are fond of their pets but view them primarily as useful animals, not companions; Humanists, who see their pets as practically human; and Protectionists, who see animals as separate beings that humans have a responsibility to help and protect. The last group includes many people who take in foster pets or volunteer to care for abandoned animals.

He found that people who live in rural areas tend to hold more Dominionist attitudes, while those in cities are slightly more likely to hold a Humanist view. He also found that people with children reported that their attitudes changed with the birth of their child. Before the birth, he said, people reported feeling like their pet was their child. After having a kid, they were less likely to hold that attitude.

The findings could explain, in part, why people with kids spent less time with their pets, Blouin said.

"Part of it is time and money, perhaps just not having the resources," he said. "But also part of it is about definition."

Fortunately for fluffy companions everywhere, this less-sentimental view toward pets tends to shift back after the children grow up. Empty nesters often reported that relationships with their pets were stronger after the children left the house.

Even if you view your pet more as a useful animal than a fuzzy child, it may be wise to not set your cat or dog aside when a new baby comes along. Pet ownership can be enormously beneficial, said Rebecca Johnson, a professor of nursing at the University of Missouri and director of the Research Center for Human-Animal Interaction. Studies have shown multiple benefits to interaction with companion animals, from lowered blood pressure to increased survival after heart attack.

Johnson and her team have studied the health effects of dog-walking on people over 60. They've found that people who walk with a dog from an animal shelter increased their walking speed by 28 percent, compared with no significant increase in people who walked with a human companion. Part of the reason for the difference may be in the dose of doggie enthusiasm, said Johnson, who was not involved in the current research.

"If treadmills provided the kind of reinforcement that dogs do, we wouldn't have the obesity epidemic that we do," she said.

Even better, she said, the dogs that participated in the walking program were more likely to be adopted and less likely to be euthanized — just the kind of result to make a Protectionist smile.