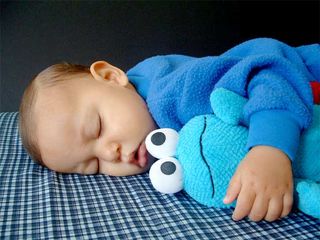 Newborn infants are in a dream state about 70 percent of their sleep time, according to Hugo Lagercrantz, a pediatrician.
(Image: © Stock.xchng)

For parents having trouble getting their infants to sleep, a new study suggests being emotionally available to baby's needs is key to a good night sleep. The study suggests it's not so important how much time parents spend with children or what they do at bedtime, but rather the quality of that time.

The findings may be important for both sleep-deprived parents and their kids. Chronic sleep troubles in childhood are linked with daytime behavioral problems, sleepiness and attention problems, and poor academic performance, the researchers say.

Being emotionally receptive would include things like gazing at your infant while breastfeeding, or noticing if your child is not interested in a book, and so putting the book down. Some sleep experts have advised parents set a strict sleep schedule and keep certain routines that become associated with going to sleep, such as reading a book and dimming the lights.

When parents provide reassurance through emotional communication, the researchers believe that it lets children know they are in a safe environment. They argue that feeling safe is ultimately a prerequisite for achieving deep sleep.

"Bed time can be a very emotional time. It heralds the longest separation of the day for most infants," said study researcher Douglas Teti, professor of human development and family studies at Penn State. "It struck me that going to sleep, and sleeping well, is much easier for some young children than others, and I wanted to assess what factored into this, and what parents and children contribute to sleep patterns."

This study involved 35 families with infants 24 months of age and younger, and is the first to use multiple video cameras in the infants' and parents' bedrooms to capture parent-infant interactions at night. Fathers were also included, but since only seven of them interacted with their infants for a long enough time (at least two to three minutes) during bedtime, the researchers focused on maternal bedtime behavior only.

For instance, one emotionally available mother responded to her 6-month-old infant's vocalizations during breastfeeding. "She continuously gazed at the infant's face and, whenever the infant vocalized, she responded promptly (e.g., 'It's OK.')," the researchers write in a recent issue of the Journal of Family Psychology.

Another mother "used stern directives with her 24-month-old during book-reading whenever the child got up out of bed," and "continually attempted to engage the child in the book despite clear signs that the child was losing interest (e.g., child was fidgety and continually turned his attention elsewhere)," the researchers noted. The result: "The child got up and left the room four times before he eventually fell asleep."

How you do it

The results showed that what mothers do with their infants at bedtime, say whether they have close physical contact, may be less important to the infant's sleep success than the emotional quality that underlies these activities. This contradicts past research, which had suggested prolonged close physical contact with a parent undermines babies' ability to sleep on their own.

"Quality of parenting appeared to be more important than what parents did, or how long they did it," Teti told LiveScience.

Teti said he is finding similar results in a more in-depth analysis of factors promoting infant sleep as they age from 1 month to 2 years. One of the next steps will be to examine links between infants' temperamental styles, parenting at bedtime and during the night, and sleep disruptions, Teti said.