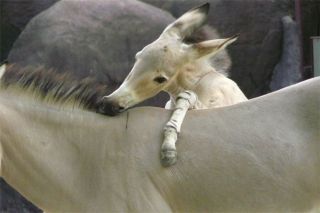 Some Somali wild asses are solitary and others live in herds that can have up to 50 members. And mothers stay with their dependent foals.
(Image: © Marshall and Saint Louis Zoo.)

Five thousand years ago, in North Africa, humans formed an alliance with the wild ancestors of the donkey, twice.

This was no insignificant feat; domestication of the donkey's ancestors helped these ancient cattle herders become more mobile and adapt as the Sahara Desert expanded. Donkeys also expanded over-land trade and contributed to the growth in the early Egypt state.

New research answers, and raises, questions about who these wild animals were and how humans brought them into the fold.

Modern donkeys can be divided into two, genetically distinct groups, leading scientists to believe that they have two ancestors, which were believed to be the Somali wild ass and the Nubian wild ass, both subspecies of the African wild ass.

In new research, scientists analyzed mitochondrial DNA, or that contained in the energy-producing centers of cells, taken from archeological sites, museum collections and live animals.

Their results showed that the Somali wild ass, or a close relative of this subspecies, was not one of the two ancestors. It is possible this unknown ancestor came from an extinct population of wild ass or from another region, the researchers suggest.

The more telling finding came when researchers confirmed that the Nubian wild ass was indeed the ancestor of one of the donkey groups. As part of their genetic analysis, the team found evidence that humans domesticated Nubian wild asses multiple times, and that all the while, these future donkeys continued interbreeding with their wild relatives.

The findings also suggest donkey domestication took place in Africa, far from the Fertile Crescent, where most animals were once believed to be domesticated.

"That is why our paper is so important. It shows not only did domestication happen in Africa, it wasn't a one-off thing, it happened over a period of time," said study researcher Connie J. Mulligan, a molecular anthropologist at the University of Florida. "There was local knowledge about how to do this."

Small numbers of the Somali subspecies live in zoos and wildlife preserves , and about 600 still live in the wild in Eritrea and Ethiopia.

However, the Nubian wild ass was last seen in the Red Sea Hills of Sudan in the late 20th century, and may recently have become extinct. One of the study researchers, Albano Beja-Pereira, a biologist at the University of Porto, Portugal, found evidence of its continued existence in the mid-1990s.

Genetic research done as part of this study confirmed that the samples he collected did indeed come from the Nubian wild ass, according to Mulligan.

The findings were reported in the June issue of the journal Proceedings of the Royal Society B.