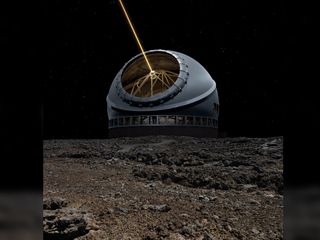 The Thirty Meter Telescope is expected to generate images that are more than 12 times sharper than those from the Hubble Space Telescope.
(Image: © TMT International Observatory)

Native Hawaiian groups are protesting and peacefully blocking construction of the Thirty Meter Telescope (TMT) on Mauna Kea, the dormant volcano and sacred site that's the highest point in the Hawaiian Islands.

Since July 17, thousands of activists have peacefully blocked the road leading to the site, dancing, singing and stymying construction of the $1.4 billion instrument. Dozens of Hawaiians were arrested during the protests July 17, according to the Honolulu Star Advertiser, after Gov. David Ige issued an emergency proclamation. Actors Dwayne Johnson and the Hawaii-born Jason Momoa (best known for his roles in "Aquaman" and "Game of Thrones") have both joined the protestors.

Johnson visited the protests July 24 and met with opponents of the telescope construction, later appearing on "The Tonight Show with Jimmy Fallon" and saying, "The truth is, this mountain is their church — like building on their church."

Momoa joined the protests July 31 with his children — Lola, 10, and Nakoa-Wolf, 12 — saying of the TMT, "There's one thing that's not gonna happen — they're not building it here," according to Hawaii News Now.

The underlying conflict around the TMT has gone on for years in the form of legal battles and periodic protests. The TMT project won final approval from the state's supreme court in 2017 and was slated to begin construction on July 15. Astronomers involved in the project have pointed to the scientific benefits the gargantuan telescope could offer; it's expected to take images that are 12 times sharper than what the Hubble Space Telescope captures. Proponents also point to the benefits offered by the observatories already constructed on the volcano. Indigenous activists and their supporters have pointed to the environmental and cultural problems the telescope poses, arguing that native groups were not sufficiently consulted in the process of planning the instrument.

"We are taking a stand not only to protect our 'mauna' and 'aina,' our land, who we have a genealogical connection to," protestor Kaho'okahi Kanuha told CNN. "We are fighting to protect it because we know if we cannot stop this, there is not very much we can fight for or protect. … This is our last stand."

Inside Higher Ed reported that Mauna Kea is revered as the "realm of the Hawaiian gods." It was, historically, a place only priests and royalty — deposed with the help of 300 U.S. marines in the 1890s — were allowed to visit.

Astronomers selected the Mauna Kea site, according to a TMT statement, after a "rigorous" five-year search for a place above the clouds that is stable, dry and protected from light pollution.

Brent Tully, a University of Hawaii astronomer involved in the TMT project, told Inside Higher Ed that Mauna Kea is "unrivaled as the best place north of the equator for ground-based observations" and "the planet's gift to humanity as a place to observe the heavens."

He acknowledged that Hawaiians "have a legitimate grievance with the loss of their independence as a sovereign nation," adding that it's unfortunate that the TMT has become "embroiled in the sovereignty issue." The construction became a sovereignty issue because it touches on who makes decisions regarding sacred Hawaiian land.

Henry Yang, chair of the TMT's board of governors, said in a July 10 statement, the most recent official statement from the observatory, "We have learned much over the last 10-plus years on the unique importance of Mauna Kea to all, and we remain committed to being good stewards on the mountain and inclusive of the Hawaiian community."

The language of "stewardship" used by the TMT is part of the problem that Hawaiians see with the project, Iokepa Casumbal-Salazar, an indigenous studies professor at Ithaca College in New York, said during an April webinar hosted by the Union of Concerned Scientists, according to Space.com.

"If we don't take into account the ways in which scientists who practice their work on Mauna Kea today are inheritors of the privileges that were established for them through U.S. militarism … it will be impossible to understand why Hawaiians stand against the astronomy expansion," Casumbal-Salazar said.

Hard to express how strong the mana and how heavy the heart was when I walked this sacred land with these people - our people. This issue is much greater than a thirty meter telescope to be constructed on the Mauna. It’s humanity and compassion. Its respect for culture and approaching this with deep care and sensitivity. I’ll always be strong advocate for the advancement of science and technology, but never at the sacrifice of human beings who’s hearts are hurting thru mismanagement and breach of trust. I believe in forward progress, but only when it comes thru humanity. I don’t believe in leaving people behind, I believe in bringing people with us. The best of leaders find a way to make progress thru humanity and will always lead with empathy. I’m hopeful that leader will emerge to take care of the thing that matters most in this situation - the people. I appreciate the views shared with me from reps on both sides of this issue. It’s always healthy and critical to have open heart to heart dialogue. In the end, I stand with the people. #ProgressThruHumanity #LeadWithEmpathy #MaunaKea

Building the nearly 100-foot-wide mirror of the TMT will mean moving a significant amount of earth on Mauna Kea, a requirement that leaves little of the environmental impacts up for negotiation, Christophe Dumas, TMT observatory scientist and head of operations, told Physics Today.

Some astronomers and astrophysicists have raised questions about the project. As of this writing, 150 astronomers from TMT-affiliated institutions and 947 astronomers from non-TMT-affiliated institutions (including professors and students) have signed a letter calling for police and military forces to leave the site, writing, "We write today not to place a value judgment on the future of TMT on Maunakea, but to question the methods by which we are getting the telescope on the mountain in the first place."

University of New Hampshire astrophysicist Chanda Prescod-Weinstein and University of California, San Diego biologist Keolu Fox (now a visiting professor at the University of Hawaii), wrote in The Nation that "far from some replay of an ancient clash between tradition and modernity, this is a battle between the old ways of doing science, which rely on forceful extraction (whether of natural resources or data), and a new scientific method, which privileges the dignity and humanity of indigenous peoples.

"If we were to examine each stage of approval in the process of developing the TMT, it seems painfully obvious that the long legacy of colonialism played a significant role in determining which stakeholders had a seat at the table and which ones didn't," the two professors added.

Astronomers behind the TMT continue to insist that the project should go forward in Hawaii, but in 2016, they selected La Palma in Spain's Canary Islands as an "excellent" alternative for performing the telescope's core science operations, noting good relations with the alternative host country. (Momoa wrote "TMT + Canary Islands = Discovery" on his own chest and "TMT + Mauna Kea = Desecration" on Nakoa-Wolf's.)

Right now, other telescopes already on Mauna Kea are offline, as staff have left the site during the protests.

Editor's note: This story was updated to note the 150 signatories of the letter from TMT-affiliated institutions. Thanks to Eric Gaidos, a researcher at the University of Hawaii, for identifying the omission.