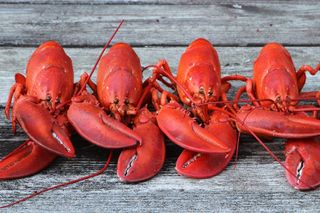 These lobsters are red all over.
(Image: © Shutterstock)

It's no mystery why natural selection favors bluish-green lobsters: Individuals that live inconspicuously on the seafloor are more likely to survive and pass their genes on to offspring.

Lobsters live in rocky or muddy areas, said Anita Kim, an assistant scientist at the New England Aquarium in Boston. They rely on a specialized blue pigment to blend into their environment and avoid the gaze of cod, haddock and other fish that enjoy lobster dinners.

However, as any lobster connoisseur knows, these crustaceans turn bright red when they're heated. So, why does this dramatic color transformation happen? [Do Lobsters Live Forever?]

Scientists have struggled to understand this pigment change since the 1870s. Well over a century passed before the biochemistry came into focus. As it turns out, lobster camouflage is the product of two molecules: a protein called crustacyanin and a carotenoid (a pigment responsible for bright red, yellow and orange hues) called astaxanthin.

Lobsters can't make their own astaxanthin, so they get it from their diet.

"It's very similar to beta-carotene," Kim told Live Science. "Flamingos eat shrimp with beta-carotene and turn pink. When a lobster eats astaxanthin, it gets absorbed into their body."

But that isn't a simple process. Astaxanthin is red, but it turns live lobsters bluish green. It wasn't until 2002 that researchers discovered that the protein crustacyanin changes the color of the pigment astaxanthin by twisting the molecule and changing how it reflects light.

"When astaxanthin is free, it's red. When it's bound to crustacyanin, it turns blue," Michele Cianci, a biochemist at Marche Polytechnic University in Italy, told Live Science. He was a doctoral student in the lab where researchers discovered the phenomenon.

When lobsters are heated to high temperatures — whether they're boiled, baked or grilled — crustacyanin lets go of astaxanthin, allowing the pigment to untwist and show its true color.

As the lobster is heated, the crustacyanin molecules lose their shape and reorganize in different ways, Cianci said. This physical change in the protein's shape has a noticeable effect on the lobster's color.

To put it another way, "imagine holding a rubber band in your hands," Cianci said. "You can impose any kind of configuration you want," just as the crustacyanin molecules can twist the astaxanthin.

"When you release the rubber band, it goes back to its own shape," he said. Likewise, when the crustacyanin is heated, it lets go of astaxanthin, allowing the pigment to turn red again.

Scientists have nailed down the chemistry, but they still don't completely understand the physics of how crustacyanin can temporarily and reversibly make a red pigment blue. Several research groups are using a range of techniques to figure out how crustacyanin and astaxanthin work together to reflect blue light.

"Why astaxanthin is blue when it's bound is being investigated," Cianci said. But that shouldn't stop you from dropping some knowledge about carotenoids with your friends next time you chow down on a succulent red lobster.