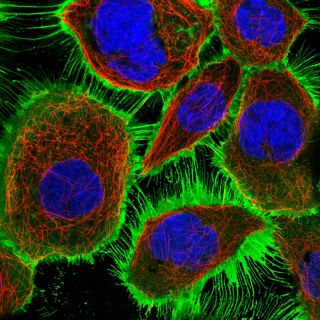 An image of a protein called EGFR (epidermal growth factor receptor) in human cells viewed under a microscope. EGFR, which is shown in green, is localized to the cell's membrane. The cell's nucleus is shown in blue.
(Image: © Image from the Human Protein Atlas)

A new, detailed map of the proteins found in human tissues reveals exactly which proteins are special to organs such as the liver or brain, and which ones are common across all tissues in the body.

Understanding how protein production varies across different tissues in the body, and which proteins are made in each organ will help scientists better study cancer and other diseases in which proteins don't function properly, the researchers said.

The findings could also "help explain some side effects of drugs and thus might have consequences for future drug development," said Mathias Uhlén, who led the work and is a professor of microbiology at KTH Royal Institute of Technology in Stockholm, Sweden. [The 7 Biggest Mysteries of the Human Body]

Humans have about 20,000 genes that code for proteins, and the researchers used several methods to analyze these genes. The results showed that almost half of the protein-coding genes are expressed all over the body, which suggests that they are needed in all cells to maintain "housekeeping" functions such as cell growth, energy generation and basic metabolism, the researchers said.

Other proteins were found in specific organs. The testes have the highest number of unique proteins, followed by the brain and the liver, the researchers found.

The study, published today (Jan. 22) in the journal Science, is part of The Human Protein Atlas, an open-source database of the human protein, which launched in November. The database is the result of a decade of research in multiple laboratories.

The findings will be important information for the pharmaceutical industry, Uhlén said. The researchers found that about 3,000 proteins are released from cells, and more than 5,500 proteins sit on the membrane of the cells.

Moreover, 30 percent of proteins that are targeted by drugs are found in all tissues and organs, which could explain why drugs can cause side effects, including effects that may seem strange."

The map of the human proteins is available online for other scientists to explore, and will help efforts to find the "missing proteins" and complete the list of genes that code for them, the researchers said.