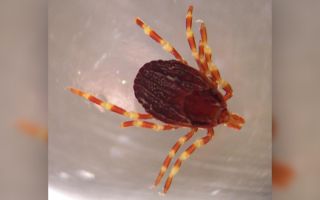 Giant, invasive ticks have been spotted in the Netherlands, and they do something that's frankly horrifying: They run after their hosts.

An unusually large adult tick was found on July 13 in Drenthe, a province in the northeastern part of the Netherlands. The arthropod, Hyalomma marginatum, is not native to the country. Another of these ticks had been discovered in the region one week earlier, officials with the National Institute for Public Health and the Environment (RIVM) said in a statement on July 24.

The invasive newcomers can measure up to 0.2 inches (6 millimeters) long — about twice the length of the more common sheep tick (Ixodes ricinus) — and grow to 0.7 inches (2 centimeters) when engorged with blood. And while Ixodes ticks sit and wait for animal hosts to wander close by, Hyalomma ticks actively pursue their hosts, hiding on the ground and then scuttling toward them, according to the European Centre for Disease Prevention and Control (ECDC). [10 Important Ways to Avoid Summer Tick Bites]

Certain signals broadcast to Hyalomma ticks that a likely meal is near, among them body heat, vibrations or scents. Ticks can visually identify a target from a distance of 30 feet (9 meters) away. Once the host is spotted, ticks may track them for upward of 10 minutes and over hundreds of feet, the ECDC says.

As adults, the ticks prefer feeding on large mammals, while nymphs target smaller victims for their blood meals. Birds are also on the menu; the parasites are thought to travel far and wide by hitchhiking on their hosts — especially when those hosts are migrating birds, said Alicja Buczek, a tick researcher with the Department of Biology and Parasitology at the Medical University of Lublin in Poland.

Hyalomma ticks are widespread in Northern Africa and Asia and are also found in Southern and Eastern Europe. There have been sporadic sightings in parts of Northern Europe and in Russia, but these are not thought to represent established populations, the ECDC reported.

Tests showed that neither of the ticks carried the pathogen for hemorrhagic fever. However, the tick from Drenthe carried the microbe Rickettsia aeschlimannii, which causes spotted fever. The first sign of spotted fever is usually a dark scab forming at the site of the bite; symptoms include rash, fever, muscle pain and headaches, but the disease is treatable with antibiotics, the CDC says.

Future suspected Hyalomma sightings in the Netherlands should be reported to the Netherlands Food and Consumer Product Safety Authority, RIVM representatives said in the statement.