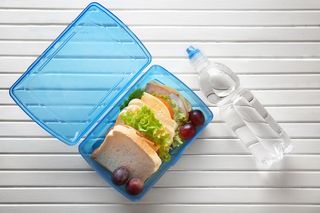 Worries over bisphenol A (BPA), a chemical commonly found in plastics, have led to a surge in BPA-free products. But now, a new study suggests that the chemicals replacing BPA may also be cause for concern.

The study found that, among U.S. children, exposure to two common chemicals used in place of BPA — called bisphenol S (BPS) and bisphenol F (BPF) — is linked with an increased risk of obesity. Both BPS and BPF are similar in structure to BPA and can be found in some types of plastic, canned goods and other products.

The study, published today (July 25) in the Journal of the Endocrine Society, adds to a growing body of evidence linking bisphenol chemicals with obesity and weight gain. In 2012, the same group of researchers found a link between BPA and childhood obesity.

Use of BPS and BPF "is growing because manufacturers are replacing BPA with these chemicals," study lead author Melanie Jacobson, of the New York University School of Medicine, said in a statement. "Although diet and exercise are still understood to [be] the main drivers of obesity, this research suggests that common chemical exposures may also play a role." [12 Hormone-Disrupting Chemicals & Their Health Effects]

However, the new study found only an association and can't prove that BPS and BPF cause obesity. It may be that children who are already obese tend to have higher levels of exposure to these chemicals, the authors said.

The U.S. Food and Drug Administration considers BPA safe at the low levels found in foods, although the agency continues to review research on the topic, according to the Mayo Clinic.

Still, given the overall evidence linking bisphenol chemicals with obesity and the growing use of BPA-replacement chemicals, researchers should continue to monitor the potential health effects of these chemicals, the authors said.

BPA is similar in structure to the hormone estrogen, and so it could interfere with the actions of hormones in the body. The chemical can leach into food and beverage products from packaging materials. Previous studies have linked BPA exposure to many health problems; in addition to obesity, BPA exposure has been tied to early puberty, miscarriage, diabetes, heart disease and cancer.

However, relatively few studies have examined the potential health effects tied to other bisphenol chemicals, even though these replacement chemicals could have similar effects, the authors said.

In the new study, the researchers analyzed information from more than 1,800 U.S. children and teens ages 6 to 19 years old who participated in a national health survey from 2013 to 2016. As part of that survey, participants underwent a physical exam and gave urine samples.

The researchers examined levels of BPA, BPS and BPF in participants' urine samples.

Children with high levels of BPS in their urine samples were more likely to be obese, as determined by their body mass index (BMI), compared with kids who had lowever levels of BPS.

The researchers noted that it's possible that children who are obese consume more food and beverage products that are tainted with bisphenol chemicals, or even that the foods packaged with bisphenol-containing materials contriubte to obesity. However, the findings held even after the researchers took into account the children's calorie intake, the authors said.

The new study adds to the evidence that "BPA replacements are likely to be causing similar kinds of concerns as BPA itself," said Dr. Kenneth Spaeth, chief of occupational and environmental medicine at Northwell Health in Great Neck, New York, who wasn't involved in the study. "From a consumer standpoint, the label of 'BPA free' really should not necessarily equate with meaning that it's safe or healthier."

Spaeth noted that, historically, this kind of pattern has occurred before, with companies replacing an apparently harmful chemical with a very similar chemical, and "[it] turns out that the replacement is as bad [as] or sometimes worse than what the original issue was."

Interestingly, the new study did not find a link between BPA and childhood obesity, in contrast to the 2012 study. The lack of a link with BPA in the new study may be due to the fall in BPA use in recent years, leading to a decline in exposure to the chemical, the authors said. In the 2012 study, the average concentration of BPA in urine samples was 2.8 nanograms per milliliter (ng/ml), compared with just 1.3 ng/ml in the current study.

Consumers who want to avoid bisphenol chemicals besides BPA "are in a very difficult position," Spaeth said. There is no way for consumers to really know whether a product contains these chemicals, he said.

"I think consumers don't have good options in terms of how to … make informed choices," Spaeth told Live Science. For this to change, there would need to be changes to the way these chemicals are regulated and how products are labeled, he said.