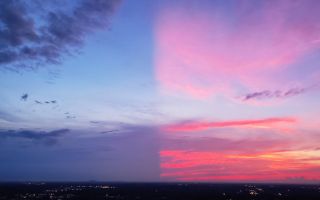 The spectacular colors of this sunset cover only half the sky. A large, distant cloud below the horizon shadows the other half.
(Image: © Photo courtesy of Uma Gopalakrishnan)

A recent sunset photo stunned viewers on social media. An unusual optical effect made the sunset resemble a split-screen image showing two very different skies side by side.

On the photo's right side is a horizon saturated with hues of red and yellow. But on the left side, the sky is darker and drabber. Uma Gopalakrishnan captured the photo in Charlotte, North Carolina, on July 13 at 8:55 p.m. local time, sharing the unaltered pictures and video on Instagram and Twitter.

Though it looks unnatural, the so-called split sunset wasn't created with filters or Photoshop. Rather, it was caused by the shadow of a large cloud below the horizon that prevented sunlight from striking the clouds that were closer to viewers on the ground. [Image Gallery: Sunrise and Sunsets]

"I had never seen something like this before. And I couldn't believe it when I did see it that night!" Gopalakrishnan told Live Science in an email.

Sunsets and sunrises produce spectacular colors because, with the sun sitting low on the horizon, the light has to travel farther through Earth's atmosphere (compared with other times of the day) before we see it, according to the National Oceanographic and Atmospheric Administration (NOAA). Because of this long journey, more of the blue light in the electromagnetic spectrum gets scattered, so the light that reaches our eyes appears reddish, NOAA explains.

And if the setting sun's light has to travel through particles in the air, such as volcanic ash or pollution, blue light gets scattered even more, and red hues become more vivid.

But what caused this weird "split-screen" effect? When a large cloud lies between the sun and clouds that are closer to the ground, the big cloud casts a shadow. This blocks direct sunlight and keeps it from striking the other clouds, creating what looks like a vertical barrier dividing two different skies, according to Universities Space Research Association.

When the remarkable sunset emerged, Gopalakrishnan was at home, scrolling through Instagram and looking at stories about another awe-inspiring cosmic phenomenon: Manhattanhenge. (During this twice-annual event in New York City, the setting sun touches down at the horizon while staying perfectly aligned in the center of streets running from east to west.)

From her seat on the couch, before she took her photos, Gopalakrishnan saw what looked like a normal sunset. But when she leaned back, she noticed that only half of the sky was illuminated.

"That's when I got up, went to my balcony and captured those photographs and videos. I was completely awestruck," she said.

Science writer Joe Hanson tweeted a visual explanation for the phenomenon on July 16, using emojis. His diagram traces layers of clouds, showing how a large cloud can partially block the sun and cast a shadow on clouds closer to viewers.

The "split sunset" is even more intense in a second photo that Gopalakrishnan took a few minutes later in the evening; in this shot, the left half of the sky has darkened to a deep purple, while vibrant sunset colors glow on the right.