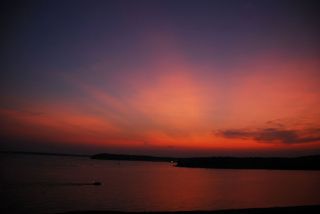 This picture of a brilliant red sunset, possibly enhanced by the dust from the eruption of Kasatochi volcano, was taken on Aug. 31 in Lawrence, Kansas. The photographer said of it, "This sunset ... was very vivid and the bright rays popped out 15 minutes after the sun set."
(Image: © Tom Soetaert)

Reports of unusually fiery orange sunsets on Earth and ruby red rings around the planet Venus have popped up on the Internet in the last week.

Some skywatchers suspect that these views are being colored by the dust and gases injected into the atmosphere by the Aug. 7 eruption of Alaska's Kasatochi volcano. The skywatchers are probably right.

Kasatochi, part of the Aleutian Island chain, sent an ash plume more than 35,000 feet (10,600 meters) into the atmosphere when it erupted last month. [Spaced Out! 101 Astronomy Images That Will Blow Your Mind]

"This is a big ash-producing eruption," said Peter Cervelli, a research geophysicist with the United States Geological Survey at the Alaska Volcano Observatory. During a survey of the area after the eruption, Cervelli and his colleagues found ashfall deposits more than 6 inches (15 centimeters) deep at a spot 15.5 miles (25 kilometers) away from the volcano.

The fine ash injected by a volcanic eruption into the stratosphere can be carried by winds all over the world. Sulfur dioxide spewed from volcanoes can react in the atmosphere to form sulfate aerosols (aerosols are tiny particles suspended in the air). Both ash and aerosols can scatter the sun's rays, giving a sunset its apparent color.

Particles in the air normally scatter incoming sunlight — this is why the sky is blue. Sunsets (and sunrises) appear reddish because the sun's rays have more of the atmosphere to travel through, and only the longer waves at the red end of the spectrum can make it. Sulfate aerosols in particular can intensify this effect by adding more obstacles for the light to get through.

USGS researcher Melissa Pfeffer, also of the Alaska Volcano Observatory, said that the sunsets and other phenomena, which have been documented by Spaceweather.com, could indeed be related to the eruption of Kasatochi, as satellites tracking the eruption's aerosol clouds show that they have spread over the entire Northern Hemisphere.

Sightings and images of unusually colorful sunsets and other atmospheric phenomena were first reported Aug. 27.

Another colorful sight skywatchers have seen are rings of light, called Bishop's rings, around the sun and moon, which occur when the aerosols diffract the light from either source.

"That's a pretty common phenomenon after volcanic eruptions," Pfeffer said, adding that the Venusian rings could be related to stratospheric ash from Kasatochi but that she was uncertain if they were technically Bishop's rings.

Ruby red sunsets and Bishop's rings were also seen after the monstrous eruption of the Philippines' Mount Pinatubo in 1991, Pfeffer added, though that eruption was on a much larger scale than Kasatochi. In fact, the ash and aerosols that spewed from Pinatubo spread across the globe and were so pervasive that temperatures in the year after the eruption were cooler than normal.