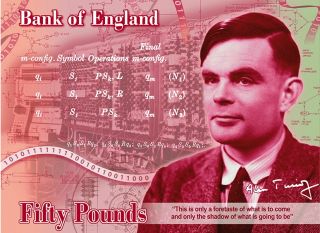 If it weren't for the legendary World War II code-breaker Alan Turing, the outcome for the Allied forces might have looked very different. The mathematician and computer scientist has been widely credited with hastening the end of the war, thanks to his work decoding German naval messages. But only seven years after the end the war, Turing, who was gay, was convicted of "gross indecency" for his relationship with a 19-year-old man. Turing wasn't formally pardoned until 2014. Now, 65 years after Turing's death, the Bank of England is recognizing the trailblazer's contributions to science and technology by featuring his face on the brand-new design of their 50-pound note.

"It was nothing short of a tragedy how a country he had served with such distinction treated him after the war, persecuting him for his homosexuality," said Demis Hassabis, a British artificial intelligence (AI) researcher, at the unveiling ceremony in Manchester. "That's why it's wonderful to see Turing on the note, as a powerful symbol of the long overdue recognition he deserves."

Not only did Turing's contributions to math and computer science aid the Allied war effort, they also laid the foundations for modern computers. In his 1936 paper titled "On Computable Numbers," Turing invented the concept of algorithms, sets of instructions that dictate how computers operate, BBC reported. He was also one of the earliest computer scientists to begin thinking about AI. His 'Turing test' is still used to determine whether a machine is "intelligent" or not.

"As the father of computer science and artificial intelligence, as well as a war hero, Alan Turing's contributions were far ranging and path breaking," Mark Carney, governor of the Bank of England, said in a statement. "Turing is a giant on whose shoulders so many now stand."

The new banknote won't just feature Turing's face. It will also include a ticker tape of binary code that spells out his birthday (June 23, 1912), a depiction of the machine he used to help break the German Enigma code, and his signature.

Turing wasn't the only scientist considered for this new note. In total, 989 scientists were nominated. The short list included Rosalind Franklin, Stephen Hawking and Adam Lovelace, among others.