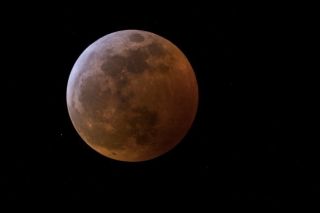 Tomorrow (July 16), the 50th anniversary of the launch of Apollo 11 to land astronauts on the moon and two weeks after the moon totally eclipsed the sun, it will be the moon's turn to undergo an eclipse of its own. The full moon, in Sagittarius, will pass partway through the southern part of the Earth's shadow resulting in a partial lunar eclipse.

This event favors the Eastern Hemisphere, known colloquially as the "Old World": Africa, Europe and western Asia. Most of South America will see the moon rise already within the Earth's shadow. Conversely, for central and eastern Asia and Australia, the eclipse will still be in progress when the moon sets during the dawn hours of July 17.

Unfortunately, North America will be completely shut out; the eclipse occurs during the daytime with the moon below the horizon.

Related: Amazing Photos of the Super Blood Wolf Moon of 2019!

The magnitude of the eclipse, which refers to the maximum percent of the moon's diameter immersed within Earth's umbral shadow, will be 65%. This deepest stage of the eclipse will take place at 21:30 UTC, when the dark red-brown umbra will cover the northern 65% of the moon's diameter. The moon will appear directly overhead, or very nearly so, from the Mozambique Channel.

The penumbral phases of the eclipse occur when the moon is only within the penumbra, or the pale outer fringe of Earth's shadow. The weak, pale-gray penumbral shading is detectable only within about 25 minutes of the partial eclipse's beginning or end, depending on sky conditions and how carefully you look. A faint shading or smudge on the moon's disk should become evident for most viewers around 19:35 UTC, and the last vestige of any faint tarnishing should disappear around 23:25 UTC.

This will be the moon's last interaction with Earth's umbra for a while. During the next four lunar eclipses — all during the year 2020 — the moon will pass only through Earth's penumbra. We'll have to wait until the morning of May 26, 2021, when the central and western United States will be treated to a total lunar eclipse, although totality will be relatively short, lasting less than 18 minutes. Then, on the morning of Nov. 19, 2021, North Americans will be treated to an eclipse covering 98% of the moon's diameter.

Finally, on the night of May 15-16, 2022, an unusually long total lunar eclipse will be visible over most of the Americas. Totality will last almost 1.5 hours. Mark your calendars.

Joe Rao serves as an instructor and guest lecturer at New York's Hayden Planetarium. He writes about astronomy for Natural History magazine, the Farmers' Almanac and other publications, and he is also an on-camera meteorologist for Verizon FiOS1 News in New York's lower Hudson Valley. Follow us on Twitter @Spacedotcom and on Facebook.