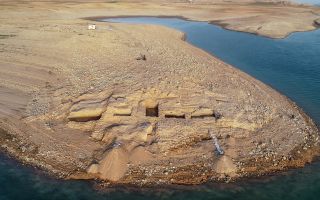 An aerial view of Kemune Palace from the west, near the Tigris River in Iraq.
(Image: © University of Tübingen/eScience Center/Kurdistan Archaeology Organization)

When a drought dried up the water in Iraq’s Mosul Dam reservoir, it exposed ruins from an ancient city dating to the Bronze Age.

The city included a palace with walls preserved to heights of 22 feet (7 meters); inside were chambers that had once been decorated with painted murals, archaeologists recently said in a statement.

The scientists dated the site — named Kemune — to the time of the Mittani Empire, a kingdom of the Near East that ruled portions of Syria and northern Mesopotamia from the 15th century to the 14th century B.C. Only three other sites from this period contain Mittani palaces, and all of them were found in the outer reaches of the empire. Kemune alone offers insights into life at the center of the kingdom, according to the statement. [Top 10 Battles for the Control of Iraq]

Low water levels in the Mosul Dam in 2010 first revealed tantalizing glimpses of the submerged structure, "but we couldn’t excavate here until now," Hasan Ahmed Qasim, co-leader of the excavation and an archaeologist with the Kurdistan Archaeology Organization (KAO) in Duhok, Iraq, said in the statement.

The palace once stood just 65 feet (20 meters) from the Tigris, overlooking the river from an elevated position on the bank, and a sloping terrace wall supported the palace's western side. To the north lay the rest of the city, according to archaeological surveys conducted around the palace ruins.

The team partly excavated eight rooms, some of which were paved with slabs of fired brick. Paintings on the palace's plastered walls retained traces of vivid hues in red and blue. Important structures built by the Mittani Empire — such as this palace — were likely commonly decorated with colorful murals, but few examples have survived to the present, making the discovery at Kemune "an archaeological sensation," said Ivana Puljiz, excavation co-leader and an archaeologist with the University of Tübingen in Tübingen, Germany.

Also discovered inside the palace rooms were 10 clay tablets inscribed with Mittani cuneiform — one of the earliest forms of writing — which experts are translating at the University of Heidelberg in Germany. According to a translation of writing on one of the tablets, the site was probably the ancient city of Zakhiku.

References to this city appear in historic records dating to around 1800 B.C., suggesting that Zakhiku stood in the Tigris River Valley for at least four centuries, the researchers said in the statement.

When the Mittani Empire crumbled, the conquering Assyrian ruler Adad-nirari slaughtered inhabitants of Taidu, the Mittani capital city, and historical accounts say that he sowed the ground with salt. Millennia later, archaeologists have found few remnants of the once-great empire; even the location of the Mittani capital Taidu is not certain, the researchers said.

The discovery of Kemune, therefore, holds great significance for reconstructing the timeline of this ancient civilization, and is "one of the most important archaeological discoveries in the region in recent decades," Qasim said in the statement.