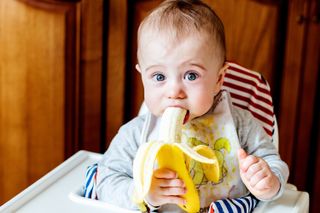 This baby really hopes that bananas are here to stay.
(Image: © Shutterstock)

Humans consume 100 billion bananas annually. For many of us, it was one of the first solid foods we ate. We're so enamoured with bananas that we've written songs about them: Bizarrely, bananas are mentioned in music more than any other fruit is.

So, what if we discovered that one day in the not-too-distant future, this familiar staple will vanish from the breakfast table? The most common banana subgroup — the Cavendish, which makes up most of the global market — is under assault from insect infestations, declining soil fertility and climate change. But the biggest hazard by far are two plant pathogens that are scavenging their way through vast monoculture (large scale, single-crop) plantations of this fruit worldwide. "We are in danger, with so much of the market taken up by this one subgroup," said Nicolas Roux, a senior scientist at Bioversity International in France and team leader of the organization's banana-genetics resources.

So, are bananas doomed - or can we save them still? [Why Are Bananas Berries, But Strawberries Aren't?]

There are thousands of banana varieties worldwide, but over time, we have selectively bred only a few for commercialization. Before the Cavendish cultivar that we consume widely today, this breeding process led to the exceptionally large, creamy, and sweet banana called the Gros Michel. The fruit was loved the world over. But in the 1950s, as banana plantations expanded to satisfy the growing global appetite, a strain of the soil-borne fungus fusarium wilt — known as Tropical Race 1 — began to take advantage of the abundance, spreading across farmland. In response, breeders developed a more resistant plant that could replace the flailing Gros Michel — and thus, the sturdy Cavendish banana was born.

The Cavendish has gone on to colonize the global market like no banana before it. Despite the hundreds of banana types around the world — some no bigger than a finger, others with large crunchy seeds or red skins — in many parts of the world, the picture-perfect Cavendish is all we know. "For Western countries, the vast majority of the bananas we eat are from the same Cavendish subgroup," Roux told Live Science. Globally, this variety makes up almost 50% of production.

So, when a new strain of fusarium wilt developed and started infecting Cavendish farms in the 1990s, people started to worry that this banana's reign might also be short-lived. The strain, called Tropical Race 4, gets into the stem, cuts off the plant's water supply, and eventually kills it. The pathogen can't be treated with fungicides — so it lives on in the soil.

The way that we farm bananas acts as an accomplice to these threats, said Angelina Sanderson Bellamy, an ecologist at the University of Cardiff in Wales, United Kingdom, who studies sustainable-agricultural systems, including banana plantations. "When you have monoculture, you just have this endless amount of food for the pest — it's like a 24-hour buffet," she said. Pathogens incubate on these croplands, and huge farms fuel their spread across swathes of countryside.

Another weakness of Cavendish bananas is that they're bred asexually — so every plant is simply a clone of the previous generation. This means pathogens spread like wildfire: Without genetic variation, the population lacks resilience to threats.

These problems are compounded by the spread of another fungal disease, black sigatoka, whose spores travel through the air, infecting plants and reducing fruit yields. Climate change is also aiding the spread of this fungus. The uptick in weather conditions favorable to black sigatoka has boosted the risk of infection by almost 50% since 1960 in some parts of the world. And while this infection can be treated with fungicide, farmers have to apply it up to 60 times a year, said Roux. "It's terrible for the workers there, and terrible for the environment." [Where Do Fruit Flies Come From?]

Fusarium wilt in particular has ravaged banana plantations across Asia — including in China, India and Taiwan — parts of Australia and East Africa. Now many are fearful that it will spread to major export countries in South America, like Ecuador - which could effectively mark the end for the Cavendish crop. "There's great risk that it could arrive there, where a lot of big Cavendish plantations are cultivated as monoculture for export to Western countries," Roux said.

Bananas on the brink

Facing this dire prognosis, can we bring bananas back from the brink? Well, it's not really bananas, in general, that need saving. Several hundred varieties of this fruit thrive successfully around the world, and some are even resistant to fusarium wilt. It's just the familiar Cavendish that's so profoundly threatened — and there is a real possibility that if fusarium wilt reaches South America, the Cavendish could go the way of the Gros Michel. That's why a big focus of the work that Roux and his colleagues do is to highlight the importance of local banana varieties in different countries.

"We are now making an inventory of all types of bananas found in the local market, mainly for their taste quality, to convince breeders to focus on these," Roux said.

Protecting this diversity is also important because some of these wilder varieties might even contain genetic traits that are key to the Cavendish's survival. Recent advances in mapping the banana genome have made this process a little easier and are helping researchers to study the interplay between disease and specific traits, and to screen wilder banana strains for multiple genetic traits that might make them resistant to pathogens like fusarium wilt. By isolating these traits, they could then be conventionally bred with, or genetically-engineered into commercial banana strains, making them more resistant.

Sanderson Bellamy, on the other hand, believes that if we're going to create long-term change, we need to modify the way we farm. "It's been 70 years [since the first fusarium wilt outbreak] and we still haven't come up with a new variety that could tick all these boxes," she said. "The root cause of the problem is the way we're growing bananas."

Solving that problem would mean switching monoculture for smaller farms that are integrated with a diversity of crops, she said. These richer agricultural tapestries would be more resilient to pathogens that favor a singular crop for their spread, and would require fewer pesticides. She believes that there's a lesson to take from the Cavendish calamity for our increasingly unsustainable agricultural system as a whole. "I think there is a crisis in our food system, and I think the [Cavendish] banana is a good example of the way that crisis is manifesting itself," Sanderson Bellamy said. [How Do Pineapples Grow?]

Changing the way we farm bananas would inevitably mean that we'd grow fewer of them, and that they'd probably be more expensive, she added. But maybe that's where part of the solution lies: getting consumers to realize that the ubiquity and affordability of this favored fruit is really just the product of a flawed system - and that we might need to adapt to a future where we pay for a more sustainable product. "I don't think the price of bananas reflects what it costs to grow these fruits," Sanderson Bellamy said.

Our next steps will determine whether the iconic Cavendish banana can be saved. Although Ella Fitzgerald and Louis Armstrong crooned "I like bananas and you like banahnahs," let's actually not call the whole thing off: we like this sweet, yellow fruit far too much.