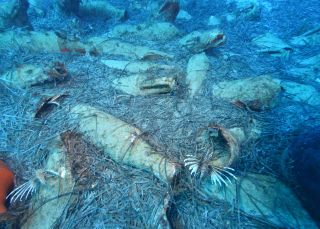 The remains of the amphorae from the ancient shipwreck, which was found off the coast of Protaras, a town in southeastern Cyprus.
(Image: © Courtesy of the Department of Antiquities, Republic of Cyprus)

Archaeologists diving off the southeastern coast of Cyprus just discovered an ancient treasure: the first known "undisturbed Roman shipwreck" in the country's history, according to a statement put out by the Cyprus Department of Antiquities.

The divers found the ship's remains off the coast of Protaras, a resort town known for its beaches. Not too far from sunbathing tourists rest the remains of the ancient ship's cargo — transport amphorae, or ancient jugs that have handles and narrow necks and often held precious liquids, such as oil and wine.

These amphorae are most likely from Syria and Cilicia, an early Roman province that is now part of southern Turkey's Mediterranean coast, the Department of Antiquities reported. [Mayday! 17 Mysterious Shipwrecks You Can See on Google Earth]

The study of this shipwreck is expected to "shed new light on the breadth and the scale of seaborne trade between Cyprus and the rest of the Roman provinces of the eastern Mediterranean," the Department of Antiquities said in a statement.

The wreck was found by Spyros Spyrou and Andreas Kritiotis, who are volunteer divers with the underwater archaeological research team of the Maritime Archaeological Research Laboratory (MARELab) at the University of Cyprus.

A group of MARELab archaeologists, students and volunteers is already documenting the ancient wreck in conjunction with colleagues at the Cyprus University of Technology and the Department of Antiquities.

Cyprus is well known for its rich archaeological history. In 2015, researchers found the 2,400-year-old tomb of a rich family that lived in northern Cyprus. The tomb was chock-full of artifacts, including jewelry, figurines, weapons and vessels.

That same year, archaeologists reported on a two-sided, 1,500-year-old amulet with an epic 59-letter palindrome, which was discovered in the ancient city of Nea Paphos in southwest Cyprus.

Other ancient Roman shipwrecks have been found off the coast of Israel, Egypt and, of course, Italy.