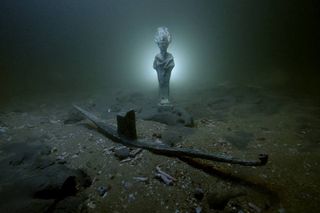 Divers have discovered the remains of three Roman-era shipwrecks, along with a votive bark likely dedicated to the god Osiris, off the coast of Alexandria, Egypt.
(Image: © Egypt Ministry of Antiquities)

Three Roman-era shipwrecks have been uncovered just off the coast of Alexandria, Egyptian antiquities authorities announced.

In addition to the shipwrecks, divers found a crystal carving of a head from the Roman era, three gold coins from the rule of Emperor Augustus, and a votive bark likely dedicated to the god Osiris, according to Mostafa Waziri, secretary-general of the Supreme Council of Antiquities.

Osama Alnahas, head of Egypt's central department of underwater antiquities, added that the divers found more wooden planks and pottery that suggest there may be a fourth shipwreck awaiting discovery. [The 25 Most Mysterious Archaeological Finds on Earth]

The Egyptian Council of Antiquities and the European Institute for Underwater Archaeology (IEASM) began this latest round of surveys and excavations off the Alexandrian coast in September.

The waters off Alexandria are rich with sunken treasures from ancient cities and neighborhoods that became submerged hundreds of years ago, due to a combination of factors, such as rising sea levels, earthquakes and tidal waves.

Over the last three decades, French underwater archaeologist Franck Goddio, director of the IEASM, has led expeditions to reveal the underwater city of Heraklion, which was the port of entry into Egypt before Alexandria was founded in 331 B.C. Goddio's team has also uncovered remains of the city Canopus, once famous for its shrines, and a sunken section of ancient Alexandria, dubbed Portus Magnus.

At these sites, divers have revealed dozens of shipwrecks, larger-than-life stone statues of Egyptian gods and pharaohs, some measuring 16 feet (4.9 meters) tall, as well as more ephemeral traces of ancient life, such as animal footprints in the soil.