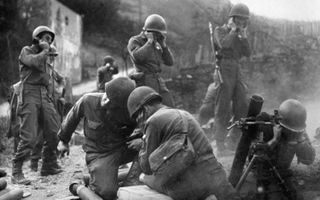 The remarkable endurance of German and Allied soldiers during World War II had a secret ingredient: performance-enhancing drugs.

During the 1940s, Nazi troops were liberally supplied with a methamphetamine called Pervitin, while American and British soldiers stayed alert with the help of the amphetamine Benzedrine.

Medical officers on both sides distributed these stimulants — and others, such as cocaine — to keep weary soldiers awake for days at a time; to enable troops to perform longer under punishing conditions; and to deaden the horrific and debilitating effects of shell shock and post-traumatic stress disorder (PTSD), according to "Secrets of the Dead: World War Speed," a new documentary airing today (June 25) on PBS. [The 10 Most Outrageous Military Experiments]

As this officially sanctioned "pharmaceutical arms race" unfolded, soldiers who took these drugs were pushed beyond the limits of their normal capabilities; but the long-term impacts of drug use were largely ignored by military medical officials, PBS representatives said in a statement.

Amphetamines (a group of stimulants that includes methamphetamines) affect the central nervous system, according to the National Institutes of Health (NIH). They induce a sense of euphoria, increase alertness and decrease appetite, the National Institute on Drug Abuse (NIDA) reported. For methamphetamines, more of the drug in a single dose directly floods the brain, compared with other amphetamines, meaning they are longer-lasting and are potentially more harmful to the central nervous system, according to NIDA.

The German methamphetamine Pervitin was initially marketed in the 1930s as a recreational pick-me-up, and scientists were experimenting with Pervitin before the war to see how long student users could stay awake and still perform well on exams, said World War II historian and documentary consultant James Holland.

By 1940, Pervitin was widely distributed among pilots in the Luftwaffe (the Nazi air force) to prime them for the rigors of long missions, or to ward off sleeplessness and hunger if their planes were shot down, Holland told Live Science

That was the year of the Blitz — the Nazis' relentless and devastating bombing attack against Britain — an initiative fueled by massive quantities of speed, Holland said.

Records from the British War Office estimated that over the three months of the Blitz — from April to June 1940 — about 35 million Pervitin tablets were sent to 3 million German soldiers, seamen and pilots, Nicolas Rasmussen, a professor in the School of Humanities and Languages at the University of New South Wales in Australia, reported in 2011 in The Journal of Interdisciplinary History.

Following this infusion of drugs, Wehrmacht soldiers (as the troops in Nazi Germany were called) marched and fought for 10 consecutive days, trapping and defeating the British army at Dunkirk in a decisive military victory, PBS representatives said in the statement.

In Britain, rumors swirled about dive-bombing Nazi pilots with a superhuman resistance to g-forces through drugs, and newspapers described sightings of German paratroopers who were "heavily drugged, fearless and berserk," according to Rasmussen. ['Breaking Bad': 6 Strange Meth Facts]

After British intelligence agents discovered Pervitin tablets in a downed German plane, officials hatched a plan to fuel Allied soldiers with a similar chemical advantage. They settled on the amphetamine Benzedrine in the form of tablets and inhalants; Britain's Royal Air Force officially sanctioned its use in 1941, to be supplied at the discretion of the medical officer attached to the squadron or air base, Holland said.

But just because Benzedrine wasn't as dangerous as Pervitin, the drug still carried risks, Holland added.

"It stops you from sleeping, but it doesn't stop you from feeling fatigued. Your body has no chance to recover from the fatigue it's suffering, so there comes a point where you come off the drug and you just collapse, you can't function," he said.

British and American armies embraced amphetamine use even though at the time, the drug had not been adequately proven to boost performance in fatigued subjects, Rasmussen wrote in the 2011 study. Rather, the Allies adopted the drug for its mood-altering capabilities; it increased aggression and confidence, and provided a boost to morale, Rasmussen said.

When American soldiers landed in North Africa in 1942, they were also operating under the influence of speed; half a million Benzedrine tablets were supplied on the orders of Gen. Dwight D. Eisenhower, according to PBS. Also featured in the PBS documentary is a 1942 memo from a British commanding officer, stating that British 24th Armored Tank Brigade soldiers received 20 milligrams of Benzedrine per day, prior to a battle in Egypt. By comparison, the recommended dosage for pilots in the Royal Air Force at the time was only 10 milligrams.

Amphetamines are currently recognized as high risk for addiction and abuse. However, in the 1940s, experts roundly dismissed this notion in scientific literature, researchers reported in 2013 in the Journal of Psychopharmacology.

"By the end of the second World War, you saw increasing knowledge of the side effects of these drugs. What you don't see is what to do with people once they become hooked — that's something that had to be learned the hard way in the years that followed," Holland told Live Science.

"The full extent of addiction and how harmful they can be was not properly understood," Holland said. "At the end of the war, there was very little help offered for people who became addicted."

"Secrets of the Dead: World War Speed" premieres June 25 at 8 p.m. ET on PBS (check local listings) and is available on PBS.org and on PBS apps.