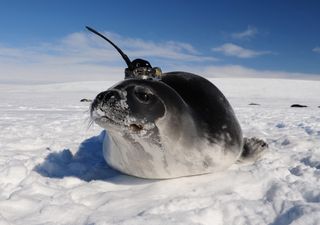 Scientists equipped seals with temporary satellite tags and sent them swimming under the sea ice in Antarctica to collect data on water conditions.
(Image: © Dan Costa/University of California, Santa Cruz)

Enormous holes in the Antarctic winter ice pack have popped up sporadically since the 1970s, but the reason for their formation has been largely mysterious.

Scientists, with the help of floating robots and tech-equipped seals, may now have the answer: The so-called polynyas (Russian for "open water") seem to be the result of storms and salt, new research finds.

Polynyas have gotten a lot of attention lately because two very large ones opened in the Weddell Sea in 2016 and 2017; in the latter event, the open waters stretched over 115,097 square miles (298,100 square kilometers), according to an article published in April in the journal Geophysical Research Letters.

Now, the most comprehensive look ever at the ocean conditions during polynya formation reveals that these stretches of open water grow due to short-timescale climate variations and particularly nasty weather. The polynyas also release a lot of deep-ocean heat into the atmosphere, with consequences that scientists are still working out. [Antarctica: The Ice-Covered Bottom of the World (Photos)]

"It may modify weather patterns around Antarctica," study leader Ethan Campbell, a doctoral student in oceanography at the University of Washington, told Live Science. "Possibly farther."

Researchers already suspected that storms had some role in the creation of polynyas in recent years. A paper published in April by atmospheric scientists in the Journal of Geophysical Research: Atmospheres pointed to a particularly violent storm with wind speeds up to 72 miles per hour (117 kilometers per hour) in 2017.

But even though the winter storms of 2016 and 2017 were extreme, stormy seas are the norm in the Antarctic winter, Campbell said.

Campbell and his team drew data from two robotic, human-size floats that were deployed in the Weddell Sea by the National Science Foundation-funded Southern Ocean Carbon and Climate Observations and Modeling project (SOCCOM). The floats drift in the currents about a mile below the ocean's surface, Campbell said, collecting data about water temperature, salinity and carbon content.

Put together, these observations explained the full story of the 2016 and 2017 polynyas. The first ingredient, Campbell said, was part of a climate pattern called the Southern Annular Mode, the polar version of El Niño. Cambell said that a regular climate variation that can carry winds either farther from the Antarctic coast, in which case they become weaker, or nearer to the coast, becoming stronger. When the variability shifts the winds closer and stronger, it creates more upwelling of warm, salty water from deep in the Weddell Sea to the colder, fresher ocean surface. [In Photos: Research Vessel Headed to 'Hidden' Antarctic Ecosystem]

This climate pattern and subsequent upwelling made the ocean surface unusually saline in 2016, Campbell said, which, in turn, made it easier for the ocean water to mix vertically. Typically, differences in salinity keep ocean layers separate, just as less-dense oil floats on top of water and refuses to mix. But because the ocean surface was unusually salty, there was less difference between the surface and deeper waters.

"The ocean was unusually salty at the surface, and that made the barrier to mixing a lot weaker," Campbell said.

Now all the ocean needed was a little stir. And the winters of 2016 and 2017 provided the spoon. Major storms created wind and waves that mixed the water vertically, bringing up warm water from the ocean bottom that melted the sea ice.

The effects of the polynyas that formed are still somewhat mysterious. The researchers found that the interior of the ocean beneath them cooled by 0.36 degrees Fahrenheit (0.2 degrees Celsius). That released heat might change local weather patterns and even shift winds globally, Campbell said.

More concerning, he said, is that the deep ocean water exposed to the atmosphere during a polynya is potentially carbon rich. Deep Antarctic waters are the graveyards for marine life, which release carbon as they decay. If that carbon enters the atmosphere via polynyas, these open-water openings could contribute slightly to climate change, Campbell said.

Whether polynyas do so is still up in the air, Campbell said, but the new study should help scientists pin down more details of Antarctica's changing climate. Current models of the Antarctic seem to predict more polynyas than actually exist, Campbell said. Now, climate modelers will have more data to improve those predictions, creating a better virtual Antarctica for understanding climate change.

The research appeared June 10 in the journal Nature.