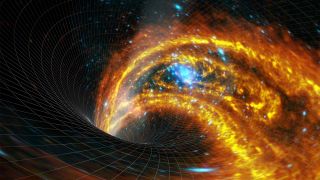 In 1974, Stephen Hawking made one of his most famous predictions: that black holes eventually evaporate entirely.

According to Hawking's theory, black holes are not perfectly "black" but instead actually emit particles. This radiation, Hawking believed, could eventually siphon enough energy and mass away from black holes to make them disappear. The theory is widely assumed to be true but was once thought nearly impossible to prove.

Black holes exert such an incredibly powerful gravitational force that even a photon, which travels at the speed of light, could not escape. While the vacuum of space is generally thought of as empty, the uncertainty of quantum mechanics dictates that a vacuum is instead teeming with virtual particles that flit in and out of existence in matter-antimatter pairs. (Antimatter particles have the same mass as their matter counterparts, but opposite electrical charge.)

This radiation is weak enough that it's impossible right now for us to observe it in space, but physicists have thought up very creative ways to measure it in a lab.

Physicist Jeff Steinhauer and his colleagues at the Technion - Israel Institute of Technology in Haifa used an extremely cold gas called a Bose-Einstein condensate to model the event horizon of a black hole, the invisible boundary beyond which nothing can escape. In a flowing stream of this gas, they placed a cliff, creating a "waterfall" of gas; when the gas flowed over the waterfall, it turned enough potential energy into kinetic energy to flow faster than the speed of sound.

Instead of matter and antimatter particles, the researchers used pairs of phonons, or quantum sound waves, in the gas flow. The phonon on the slow side could travel against the flow of the gas, away from the waterfall, while the phonon on the fast side could not, trapped by the "black hole" of supersonic gas.

"It's like if you were trying to swim against a current that was going faster than you could swim," Steinhauer told Live Science. "You'd feel like you were going forward, but you were really going back. And that's analogous to a photon in a black hole trying to get out of the black hole but being pulled by gravity the wrong way."

Hawking predicted that the radiation of emitted particles would be in a continuous spectrum of wavelengths and energies. He also said that it could be described by a single temperature that was dependent only on the mass of the black hole. The recent experiment confirmed both of these predictions in the sonic black hole.

"These experiments are a tour de force," Renaud Parentani, a theoretical physicist at Laboratoire de Physique Théorique of Paris-Sud University, told Live Science. Parentani also studies analog black holes but from a theoretical angle; he was not involved in the new study. "It's a very precise experiment. From the experimental side, Jeff [Steinhauer] is really, at the moment, the world-leading expert of using cold atoms to probe black hole physics."

Parentani, however, emphasized that this study is "one step along a long process." In particular, this study did not show the phonon pairs being correlated on the quantum level, which is another important aspect of Hawking's predictions.

"The story will continue," said Parentani. "It is not at all the end."